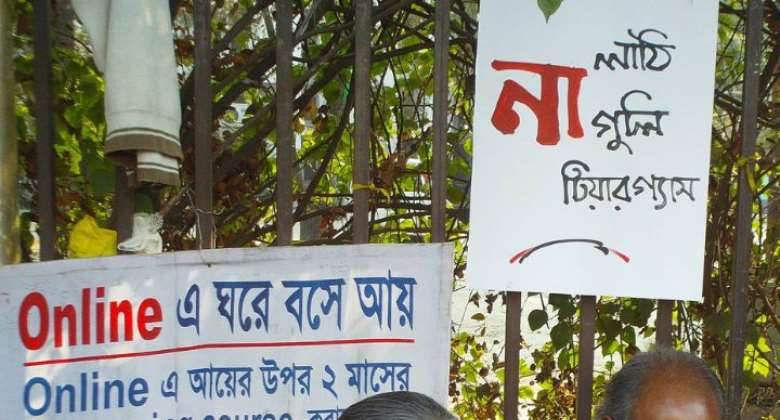 By William Gomes
Workers, Civil society people and leftist political leaders Friday demanded immediate and unconditional release of labour rights activist Moshrefa Mishu and other leaders who were illegally arrested on false charges of their involvement in recent unrest in country's apparel sector.

Moshrefa Mishu was illegally arrested on 14 December on false charges of instigating unrest and violence in three readymade garment factories of Kuril in the city following new pay structure of workers.

About 300 hundred people including Workers and Civil society peoples comes together demanding unconditional and immediate release of labor rights activists outside of national press club.

In Dhaka, workers and leftist political leaders pressed their demands at a demonstration outside of the National Press Club.

Speakers at the demonstration said serious unrest in Bangladesh's garment industry has been commonplace over the last few years, in part due to the inability of workers to express their grievances through union representation.

Speakers at the demonstration said the appalling conditions in the Bangladesh industry are well documented and include poverty wages, dire heath and safety conditions and long hours. The repressive measures taken by the Bangladeshi government fail to address the legitimate concerns of workers and the underlying causes of the turmoil.

Police and intelligence people were deployed out side of National press club where the demonstration was taking place.