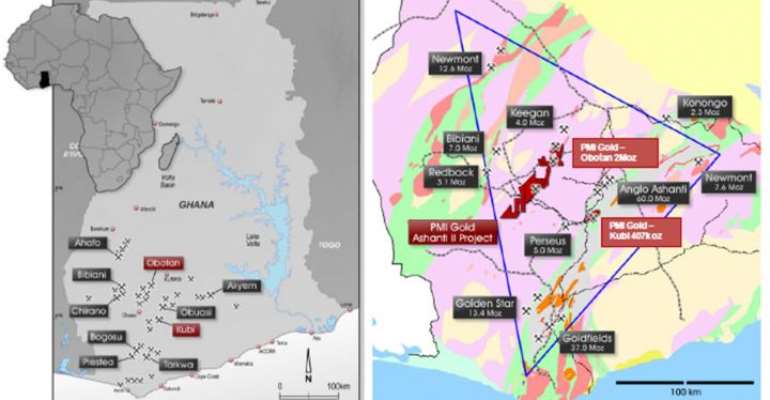 The appointment of Mr Ellison, who has a long and distinguished career in resource project development and operation, reflects PMI's planned transition from a successful explorer to a substantial West African gold producer.

As part of this process, Douglas MacQuarrie will switch from Managing Director and Chief Executive Officer to Executive Director. Mr MacQuarrie has been instrumental in PMI acquiring a significant land holding in Ghana and the Company's exploration success to date. He will retain an active role in this aspect of the Company's development going forward.

Mr Ellison is a mining engineer with 35 years' experience in resource project evaluation, development and operation around the world. His previous roles include CEO/President of TSX-V companies Asia Mineral Resources Ltd, which developed a nickel project in Vietnam, and Goldbelt Resources Ltd, which explored and developed gold projects in Burkina Faso.

“PMI is making the shift from a pure exploration company to one with substantial development opportunities which we are confident have the potential to underpin the Company's transition to major gold production status,” he said.

“Mr Ellison's knowledge and experience will help steer the Company during this evolution, ensuring we take full advantage of the outstanding opportunities we have.”

Mr Buck also thanked Mr MacQuarrie for his work as Managing Director and Chief Executive Officer and said he looked forward to his ongoing contribution.

“PMI has a substantial resource inventory, an aggressive exploration program, a healthy balance sheet and a strong, experienced management team. We are now looking forward to the next stage in the Company's development.”


On behalf of the Board,
Peter Buck
Chairman