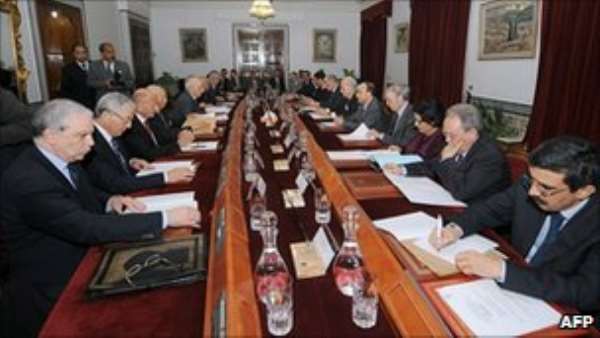 The meeting had been postponed amid opposition calls not to give key posts to members of Mr Ben Ali's RCD party.

Earlier, the RCD dissolved its central committee after its members on the interim cabinet quit the party.

On Thursday, troops fired warning shots at crowds who had massed near RCD headquarters in the capital, Tunis.

Reports said some protesters had tried to scale a wall at the building.

Spreading protests
Judges also staged a demonstration in Tunis demanding the resignation of all judges who worked for the ousted president.

There were also reports of protests on Thursday in the towns of Gafsa and Kef - the first demonstrations outside Tunis since Mr Ben Ali and his family fled to Saudi Arabia last week.

He left with his family last Friday after mass protests over unemployment, poverty and corruption.

Despite his departure, protests have continued, with demonstrators and opposition leaders demanding that all members of the RCD party be excluded from any future administration.

Earlier, it was announced that more than 30 members of the former president's family had been arrested.

It was not clear which members of Mr Ben Ali's family had been held. However, state television showed what it said was gold and jewellery seized during raids on their properties.

The official statement said those being held were suspected of crimes against Tunisia.

Exclusion demands
Political wrangling had delayed the inaugural meeting of the interim cabinet. Hours before it was due to start, a minister who had belonged to the RCD announced he was pulling out of the government.

"I am stepping down for the higher interests of the country in this delicate situation to try to bring the country out of crisis and ensure a democratic transition," the official Tap news agency quoted Zouheir M'Dhaffar, minister of state in the prime minister's office, as saying.

Four opposition ministers quit the cabinet the day after it was formed, demanding the exclusion of RCD ministers.

Prime Minister Mohammed Ghannouchi and interim President Fouad Mebazaa - former speaker of the lower house of parliament - have also quit the RCD to try to distance themselves from Mr Ben Ali.

On Wednesday, Switzerland said it had frozen any assets of Mr Ben Ali and "his entourage" held in the country.

Schools closed
In a televised address on Wednesday, Mr Mebazaa promised to deliver a complete break from the past.

He hailed "a revolution of dignity and liberty", saying that the government's top priority would be an amnesty for political prisoners. He also promised media freedom and an independent judiciary.

"Together we can write a new page in the history of our country," he said.

Although the situation across Tunisia remains tense, authorities have shortened the hours of curfew.

A state of emergency is still in place and the army is still deployed in the capital Tunis. Schools and universities remain closed.

The interim government has pledged free and fair elections within six months but has given no dates.

Under the Tunisian constitution, a new presidential election should be held within two months of Mr Ben Ali's departure.

The US has urged Tunisia to move to a true democracy, and promised assistance.

State department spokesman PJ Crowley tweeted: "The people of Tunisia have spoken. The interim government must create a genuine transition to democracy. The United States will help."