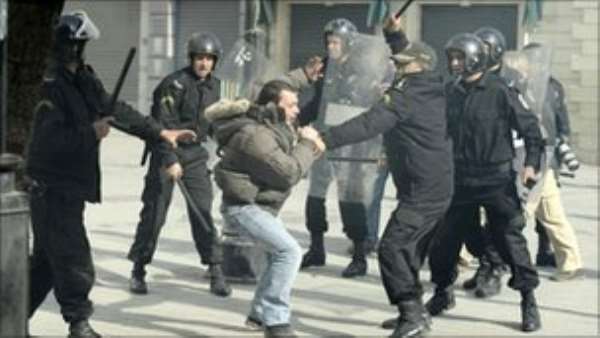 
New protests have broken out on the streets of Tunisia's capital, Tunis, hours before the expected announcement of a new national unity government.

The country has been in a state of emergency since he fled on Friday.

Prime Minister Mohammed Ghannouchi has said an agreement between the political parties would be unveiled later.

Mr Ben Ali, who had been in power for 23 years, fled to Saudi Arabia on Friday after a month of mounting protests across the country over unemployment, food price rises and corruption.

Mixed atmosphere
Monday's protesters shouted slogans against Mr Ben Ali's Constitutional Democratic Rally (RCD), says the BBC's Lyse Doucet in Tunis, as they made it clear they wanted the ruling party to have no place in the new government.

The atmosphere was mixed, adds our correspondent, with the sound of teargas being fired and gunshots ringing out during occasional skirmishes, interspersed with scenes of celebration and a rendition of the national anthem.

Mr Ghannouchi - who was also prime minister during Mr Ben Ali's rule - has pledged rapid action to fill the power vacuum, after being asked to form a government by interim President Foued Mebazaa, the former speaker of the parliament.

Sources close to the negotiations with opposition parties are quoted as saying some portfolios have already been agreed.

After a night of fighting between troops and gunmen loyal to Mr Ben Ali, tanks were patrolling in the capital and other cities in an attempt to restore order on Monday.

Meanwhile France urged Tunisia to quickly form a new government and denounced "criminal gangs" which it said were opposing the change of government.

Days of violence have cut off supplies to shops and petrol stations, causing shortages. Correspondents say many people just want life to get back to normal and are keen for details of the unity government to be announced.

The demonstrations gained momentum in December after a 26-year-old unemployed man, Mohamed Bouazizi, set himself on fire in protest against a lack of jobs in the country. He died in early January.

Amid concerns the protests may spread across the region, a man set himself on fire outside the Egyptian parliament buildings in Cairo on Monday. His motivation was not immediately clear.

There have also been several such incidents in Algeria which, like Egypt and Tunisia, has high unemployment and has been facing political unrest.

'Zero tolerance'
Secular leftist Moncef Marzouki has said he will challenge for the presidency in elections which, under the present Tunisian constitution, must be held within 60 days.

In the meantime, Mr Ghannouchi has pledged "zero tolerance" against anyone threatening the security of the country.

But the country remains volatile, and there was heavy gunfire at the Presidential Palace in Carthage, north of Tunis, overnight. In Tunis fighting also continued at the the presidential residence and the interior ministry, where two gunmen firing from a nearby roof were reportedly shot dead by security forces.

The BBC's Wyre Davies, in Tunis, says that while the Tunisian army does not appear to be interfering in the process of political reform, the motives of some members of the police and security services loyal to the ousted president may be more sinister.

The former head of the presidential security force, Ali Seriati, was arrested on Sunday and accused of threatening state security by fomenting violence.

Meanwhile, long queues have appeared at petrol stations and many people are complaining of food shortages caused by the unrest.

On Sunday evening, some Tunis residents blocked roads with makeshift barriers of branches and bins, in an attempt to protect their homes from looters.

Also in Tunis, people have been tearing down the massive portraits of Mr Ben Ali, some of them several stories high, that hung from lampposts and billboards.

There have also been attacks targeting businesses and buildings connected with the former president and his family.

In another development, a group of Swedish nationals - who said they were in the country on a wild boar hunting trip - were attacked and badly beaten in Tunis after it is believed they were mistaken for a group of foreign mercenaries.