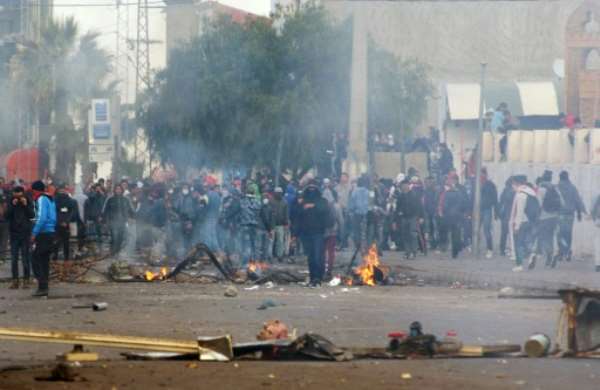 Tunis (AFP) - Tunisia on Friday declared a nighttime curfew across the country after a wave of protests and clashes that constitute the most serious outbreak of social unrest since its 2011 revolution.

Anger erupted over the death last Saturday of an unemployed young man who was electrocuted when he climbed an electricity pole while demonstrating in central Tunisia.

The unrest has spread around the country including to Tunis where shops were burnt and looted in one suburb.

The interior ministry said the 8pm to 5am curfew was necessary to prevent damage to property and to ensure public safety.

Prime Minister Habib Essid, on a visit to France, said that the situation "has been brought under control".

President Beji Caid Essebsi was due to deliver a televised address to the nation on Friday evening, his office said, in what would be his first public remarks since the recent unrest began.

Earlier Friday new clashes broke out in the central town of Sidi Bouzid between stone-throwing protesters and police who fired tear gas, according to an AFP journalist.

Authorities called for calm after 16 people were arrested on vandalism charges in a suburb of Tunis, the latest incident in almost a week of unrest.

An AFP journalist reported that two household appliance stores and a bank branch had been ransacked on the neighbourhood's main street and a police post burnt.

In central Tunisia, security forces have clashed with protesters in several towns, including in Kasserine where the unrest started, using tear gas and water cannons to disperse crowds.

At least three police stations have been attacked over the past 24 hours and 42 members of the security forces wounded, the interior ministry said.

"This is the most serious social crisis since 2011," independent analyst Selim Kharrat told AFP.

The unrest has echoes of the public anger unleashed by the death of a street vendor who set himself on fire in December 2010 in protest at unemployment and police harassment.

That desperate act of defiance provided the spark for the uprising that overthrew Ben Ali and inspired revolutions across the Arab world.

The new spike in unrest has prompted Essid, who also attended the World Economic Forum in Davos, Switzerland on Thursday, to cut short a European tour and return for an emergency meeting of his cabinet on Saturday.

France on Friday pledged one billion euros ($1.1 billion) in development aid to Tunisia over the next five years, after Essid held talks with French President Francois Hollande.

While Tunisia is hailed as a rare success story of the Arab Spring uprisings, the authorities have failed to resolve the problems of social exclusion and regional inequalities.

Attacks claimed by the Islamic State group last year at the national museum and a beach resort killed a total of 60 people, all but one of them foreign tourists.

An IS suicide bombing also killed 12 presidential guards in the capital in November.

The authorities on Friday urged Tunisians to be patient with them.

"We would like people to show a little wisdom and know that it is in our interest to safeguard Tunisia," Kamel Ayadi, minister for public services, governance and the fight against corruption, said on the radio.

The interior ministry said that "criminals have been taking advantage of the situation" to pillage and would be severely dealt with, while "peaceful demonstrations" would be respected.