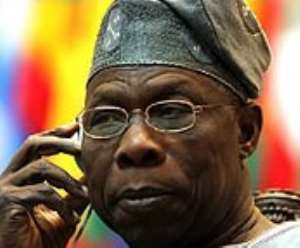 Presidential Spokesman, Ima Niboro, confirmed the appointment, saying it was to advance the quick resolution of the crisis arising from the November 28 presidential elections. According to Niboro, “yes, it is true. Former president Obasanjo is ECOWAS special envoy to Cote d'Ivoire.”

Obasanjo played a leading role from 2000 to 2005 in resolving crises.

Meanwhile, in line with his new role, Obasanjo has visited Cote d'Ivoire, and held a private meeting with the country's defiant president Laurent Gbagbo in a final effort to get him to cede power after losing the recent election.

Associated Press (AP) was present when Obasanjo arrived at the Pullman Hotel surrounded by bodyguards. He declined to comment and was whisked away to his suite on the hotel's 9th floor, where he spent around an hour before re-emerging to head to the presidential palace.

Gbagbo has remained in office, insisting that he won – a victory handed to him by the head of the constitutional council, a member of his inner circle, who cancelled votes from his opponent's strongholds.

The spokesman for Alassanne Ouattara, who is considered to be the legitimate president-elect after results issued by the electoral commission, said that Obasanjo came to meet with Ouattara immediately after leaving the palace.

The international community has been unanimous in recognising Ouattara as the winner of the election because the results issued by the electoral body were certified by the United Nations (UN) in accordance with a 2005 peace deal. The UN sent over 900 observers who fanned out across the country to watch as the votes were cast and who later reviewed results poll station-by-poll station.

While Gbagbo continues to occupy the presidential palace, Ouattara has been forced to live in a hotel guarded by some 800 UN troops. Over Christmas, Gbagbo's troops sealed the exits to the hotel and refuse to let anyone in or out. Reporters and diplomats, as well as provisions, are brought in to him via a UN helicopter that lands on the hotel's lawn.

So far, four African presidents have come in to see Gbagbo, but all attempts at mediation have failed. He is now being threatened by the 15-member regional bloc of West African countries known as ECOWAS, which has warned that if he does not step down he could face a military ouster.

A close adviser to Ouattara said that Obasanjo is coming to carry a message from the government of Nigeria, whose current president is the chairman of ECOWAS.

The bloc is scheduled to meet soon to decide whether or not to go ahead with a military intervention.
The adviser said that Obasanjo – a former military strongman – carries weight when matters of force are in question.

“In diplomacy you can say things very nicely. Or you can say it by being mean. He is here to say it in the mean way,” said the senior aide to Ouattara, who asked not to be named because of the sensitivity of the matter.

With every passing weeks since the election, the international community has turned up the heat on Gbagbo, including slapping a visa ban on him and 50 of his closest associates, barring them from travelling to Europe and the United States (U.S.).

He has turned his back on the world, and even refused to take telephone calls from U.S. President Barack Obama, who tried at least twice to call him from Air Force One, according to the State Department.

Experts say the only way to make him leave may be through force, but observers question whether the military arm of ECOWAS has the manpower and the sophistication to carry out a so-called 'decapitation strike.' A second issue is whether ECOWAS will go ahead with a move that could lead to mass casualties.

The lynchpin in the decision is Nigeria, which has one of the largest standing forces in the region and whose troops have been sent to intervene in other regional conflicts including the Liberian civil war.