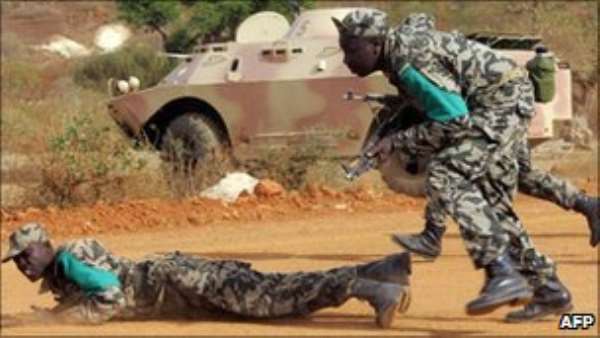 Ghana's president has said he does not think military force will solve the post-election deadlock in Ivory Coast.

John Atta Mills also said Ghana would not take sides in the stand-off between incumbent leader Laurent Gbagbo and his rival, Alassane Ouattara.

The international community has recognised Mr Ouattara as the winner of November's presidential election and urged Mr Gbagbo to quit.

But President Mills appeared to reject such an idea in a speech on Friday. "I personally do not think the military option will solve the problem in Ivory Coast," he was quoted as saying.

"Ghana is not taking sides and Ghana will support any government."

Ghana is one of three countries, along with Nigeria and Senegal, that would normally be expected to play a leading role in any military intervention by Ecowas.

Mr Ouattara remains behind a blockade at a hotel in the main city Abidjan, protected by UN peacekeepers and New Forces former rebels who control the north of the country.

Ecowas has already started drawing up plans for a regional intervention force, though there are questions about how ready or well-equipped member countries are.

Mr Gbagbo has come under increasing pressure from the international community.

In response, he said on Thursday he was expelling the ambassadors of the UK and Canada.

Both countries have expelled ambassadors appointed by Mr Gbagbo in order to replace them with diplomats chosen by Mr Ouattara.

The US has frozen the assets of Mr Gbagbo, his wife and three aides, and has announced that it is barring US citizens from financial dealings with Mr Gbagbo.

November's election was intended to reunify the country, which has been divided since a 2002 conflict.
Mr Ouattara was initially proclaimed the winner by the country's election commission - a verdict backed by the UN, which helped organise the poll.

But the country's Constitutional Council, headed by an ally of Mr Gbagbo, later ruled that he had won, citing voting irregularities in the north.

Don’t give me reason to close down schools again – Akufo-Add...
16 minutes ago