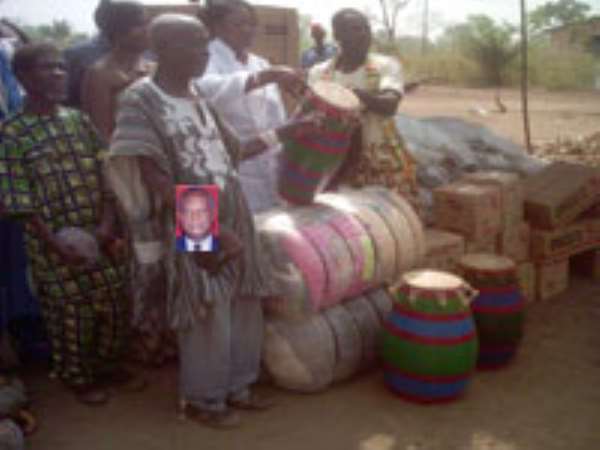 This year's Christmas celebration took a different turn from the normal conventions and church services, as some prominent individuals in the Volta Region organised parties for the less-privileged and vulnerable in society, to ensure that they celebrate the festivities happily.

The Deputy Minister for Transport, Mrs. Dzifa Ativor, is one of such persons who put smiles on the faces of cured lepers in Ho, as she made the celebration of the Christmas and New Year festivities a memorable occasion for the inmates at the lepers' village, making the village lively during the period.

The significance of Mrs. Ativor's activities at the Lepers Village was, because apart from the provision of bags of rice, maize, cooking oil, biscuits soft drinks, mates, a refrigerator and a set of local drums, she organised a party for the inmates, where she personally dined with them to demonstrate that it was relevant to support cured lepers live normal lives.

Briefing the media, Mrs. Ativor said she had established a foundation called 'Dede' Foundation for the cured lepers, to help ensure that the vital needs of the inmates were provided for, and for their children interventions as education and effective health delivery, so as to avoid the situation where they would be left out in the human development efforts of the nation.

Mrs. Ativor announced that with the establishment of the Dede Foundation, attention would be focused on the education of the children of the cured lepers, as efforts would be made to award scholarships to them, whilst a vocational training center would be established for their parents to engage in productive income-generating ventures.

She observed that the cured lepers had various talents that needed to be harnessed for both their personal development and for the benefit of the nation, saying that the neglect of the cured lepers, over the years by their families, had a psychological effect on them, particularly, as they were left without any form of entertainment.

The Deputy Transport Minister and her entourage, who were treated to the local 'agbadza' dance with drums provided for them by the Minister, made the Christmas celebration unique, as some of the inmates disclosed that this Christmas was the first time they felt at home, as they danced to their traditional agbadza, after several years of isolation.

Mrs. Dzifa continued to assure the cured lepers that the Dede Foundation aimed at making life more comfortable for them and their children, and would not only provide them with food items and other material support, but would ensure that the Foundation equipped them to generate income that would make them self reliant.

The caretaker at the Leper's Village, Mr. Anthony Adzavor, who received the items on behalf of the inmates, thanked Mrs. Ativor for her relentless efforts to help improve on the living standards of the cured lepers, and pointed out that the inmates now regarded the Deputy Minister as their mother, and always prayed for success in all her endeavours.

Mr. Adzavor confirmed that the provision of the set of drums by Mrs. Ativor would go a long way to provide the entertainment needs of the cured lepers, and said the items and the party organised for the inmates had revived their spirits, particularly, when the Minister herself was fully involved in the celebration.