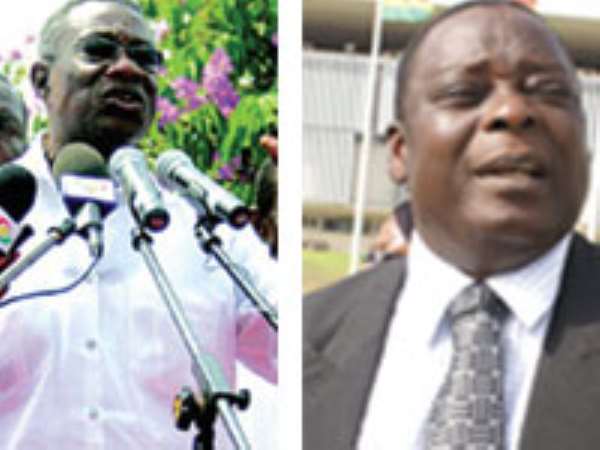 If President J.E.A. Mills is to avoid the wrath of a Northern-based pressure group, Northern Patriots in Research Advocacy (NORPRA), then he may have to consciously explain why his two-year-old government had failed to fulfill its campaign promise of setting up, and releasing an initial start-up capital of GH¢200 million, with annual contributions of GH¢100 million each year for 20 years, through the Savannah Accelerated Development Authority (SADA), to close the north-south developmental gap.

It would be recalled that NORPRA held several fora with policy analysts to discuss the SADA and other pro-poor policies aimed at bridging the widening development gap between the North and the South.

These followed press conferences and releases which stated the pressure group's dissatisfaction with the government's unwillingness to allocate a substantial amount of state resources to the SADA.

After one of such fora recently held in Bolgatanga, before the end year 2010, NORPRA and its partners reiterated their dissatisfaction with the government's unwillingness to address the issue once and for all.

They therefore, have resolved that one month from 30th December 2010, if President Mills does not respond to their concerns, they would have no other option than to use other alternative means to draw his attention, and remind him of the issues contained in their petition.

In a petition endorsed by the President of NORPRA, Mr. Adongo Ayorogo Bismark, his group was surprised that 'after coming up with this well-thought pro-poor policy to address regional inequalities and imbalances in Ghana's socio-economic development, very little commitment is seen from your government to deliver on your own good promises.'

In an interview with this reporter, Mr. Adongo disclosed that his pressure group would embark on an educational drive to enlighten the people of the three regions of the North on the SADA and the opportunities they could explore to better their lives.

During the last forum, a regional policy analyst in the Upper East Region, Mr. Jonathan Adabre Atia, lamented that the seed capital of GH¢200 million promised by the National Democratic Congress (NDC) government had not been provided.

Instead, only GH¢25 million was announced in the 2010 budget statement as seed capital for the setting up of the SADA from a multilateral Debt Relief Initiative budget of over GH¢104 million.

He was worried that there had not been any explanations from the government whatsoever, as to what it intends to do to make up the deficit of GH¢175 million promised.

In the year 2011 budget, again, another GH¢25 million has been allocated for SADA programmes instead of the GH¢100 million promised SADA every year after the seed capital of GH¢200 million.

Mr. Adabre explained that what this meant was that out of GH¢300 million that should have been allocated to SADA for the past two years, only GH¢50 million is claimed to have been posted to SADA, and said it was even doubtful whether indeed, these funds had actually been made available to SADA, because nobody has published a financial statement indicating revenues and expenses on SADA programmes.

According to him, it was striking to note that whilst only GH¢25 million was being posted to SADA from the over GH¢350 million funds allocated for Social Intervention Programmes for the year 2011, GH¢15 million had been allocated for the construction of jubilee markets at Tepa, Sekondi and Mampoteng.

This, he said, goes to illustrate that the inadequate allocations to SADA for the past years was not a result of the lack of funds, but rather suggestive of a matter of priority.

Mr. Adabre said the SADA Bill, which was supposed to have been passed by December 2009, was delayed for almost one year for no concrete reason, except for the lack of of urgency in the processing.

He said though the bill was finally passed into law by parliament some few weeks ago, the delay in passing the bill into law consequently, also affected the drawing mandate of the secretariat, and as such the SADA implementations.

He contended that checks had revealed that the two allocations emanated from donor revenues and questioned: 'How can we run such an important and critical national programme solely on donor generosity?'

The policy analyst therefore, demanded that the government prove to the citizens of the North, the people of Ghana, and the world as a whole, of its true commitment to solving the northern development question.

Meanwhile, Mr. Adabre has also reminded citizens of the north of a huge responsibility of ensuring leadership, accountability and transparency in all their dealings with the SADA and other development programmes.

Receiving the petition on behalf of President Mills, the Regional Minister, Mr. Mark Owen Woyongo, thanked NORPRA members for what he described as their mature manner in presenting their concerns, and promised to submit it to the president.

He however, urged NORPRA to also look at more sustainable ways of funding the SADA, and make their suggestions known to the government.

Mr. Woyongo pledged the government's commitment to developing the North, as he recounted some interventions it had embarked upon, including roads, agriculture, health, and electricity and the education sectors.