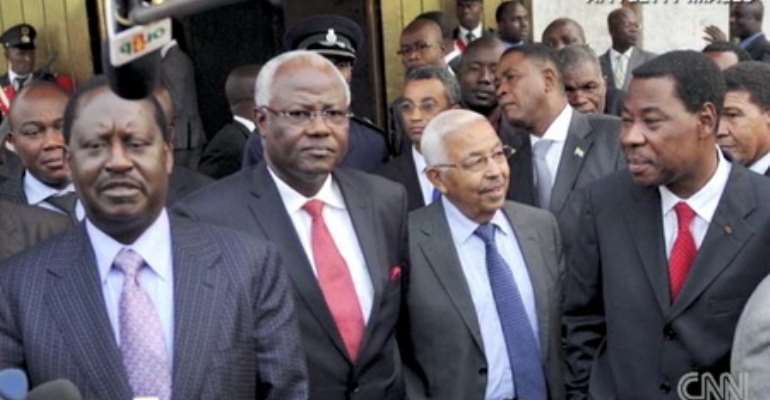 The AU delegation that met with Gbagbo


(CNN) -- The self-proclaimed president of Ivory Coast has agreed to remove a military blockade around his winning rival's headquarters, an envoy mediating the standoff said Wednesday.

The move by Laurent Gbagbo comes after talks with African mediators this week to break the political standoff that has left Gbagbo clinging to power despite international pressure for him to step down.

Gbagbo appeared to be softening his stance, said Kenyan Prime Minister Raila Odinga, and has agreed to lift the military blockade surrounding the temporary headquarters of Alassane Ouattara, the president-elect.

"The information I have is that he will lift the blockade," said Odinga, the African Union envoy for the mediation effort. "He called the head of the military in our presence and asked him to lift the embargo, and I'm assuming that has happened."

It was unclear early Wednesday whether the military presence had been removed around the Golf Hotel, where Ouattara is holed up protected by United Nations peacekeepers.

Odinga, who visited Abidjan earlier this week with a delegation representing West African states, said Gbagbo was open to a meeting with the president-elect.

"He (Gbagbo) does not want any conditions," Odinga said. "He wants amnesty, he wants to know he's safe if he chooses to stay. These are things that have to be discussed face-to-face."

In short, Odinga said, the disputed president is willing to negotiate unconditionally.

"But Ouattara is not willing to negotiate unless Gbagbo accepts that he's president," Odinga said. "Ouattara is being difficult."
Ouattara has said he will ensure a dignified exit for Gbagbo if he concedes, Odinga said.

Major organizations, including the Economic Community of West African States and the African Union, have declared Ouattara the winner of the November 28 presidential runoff vote.

Gbagbo, the incumbent, considers himself the rightful winner, and has not budged amid international calls for him to step down.

"We made it very clear that the stand of the African Union and ECOWAS is that Ouattara is the legitimate president," he said. "And in the absence of a peaceful settlement, military action will be pursued."
Odinga, who was named prime minister after an election dispute led to the formation of a coalition government in Kenya, said power-sharing will not be an option for the West African nation.

"It is dangerous," Odinga said. "It was replicated in Kenya and Zimbabwe, and set a dangerous precedence ... because it tells losers that they can cling to power in the hopes that a power-sharing will be worked out."

A coalition government is not "a healthy process," he said.
"Losers must agree to surrender power."

The U.S. will not consider a power- sharing agreement because the outcome of the election was clear, State Department spokesman P.J. Crowley said.

"No one disputes the results of the election besides President Gbagbo," Crowley said at a news briefing Tuesday. "And we believe that for the future of democracy in Cote d'Ivoire and West Africa that he should step down. And that is why we continue to support diplomatic efforts to resolve that with the peaceful transfer of power to Mr. Ouattara."

Cote d'Ivoire is the French name for Ivory Coast, a former French colony.

Gbagbo has demanded a recount, which mediators have said is not an option because the election documents have been in the custody of his supporters.

Mediators will return to Ivory Coast in the near future, but a date has not been set, Odinga said.