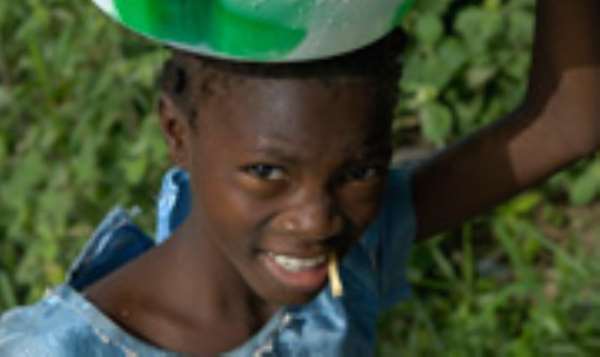 While 90% of the capital citys residents have access to safe water, only about one-third have drinking water piped into their homesand even among that group, many get only an irregular supply.

Many households must buy water for flushing and washing from private tankers, and drinking water from private producers. Those with no room to store watermainly the poorpay more for it, says resident Beatrix Allah-Mensah, a World Bank social development specialist whose portfolio includes water-related projects.

Its very expensive to buy it this way, one day at a time, she says. Water flow into homes is a big challenge, even in Accra.

In the capital, supply simply doesnt meet demand. You can still improve a lot of things in order to have better distribution of water, adds Ventura Bengoechea, a World Bank water and sanitation expert. But at the end of the day, more water is needed to supply water 24/7 to everybody.

Reaching Middle Income Status
Ghana was recently declared a middle-income country, based mainly on a rebasing of its economic indicators. Support from the International Development Association (IDA), the World Banks fund for the poorest countries, and other donors has helped the country reduce poverty and modernize over the last decade.

But many people remain poor, and important development goals still must be met.

Ghanas water deficit, among other factors, has led the government to estimate it will need to invest about $1.6 billion a year over 10 years for infrastructure, to help the country develop the level of services appropriate for a middle-income country.

In the water sector, plans are under way to meet that benchmark. Ghanas government plans to double the capacity of the Kpong intake and water treatment plant to deliver another 40 million gallons of water a day to the Accra metropolitan area. Officials recently signed an agreement with Export-Import Bank of China for a $270 million concessionary loan for the project. And Ghana has partnered with the World Bank to implement a new, $75 million water and sanitation project that would help distribute water, with a special focus on the most vulnerable residents.

Safe Water to 1.6 Million
The World Bank and other partners, including the African Development Bank, the Netherlands, and the Canadian International Development Agency, have been working with the Ghanaian government to increase access to safe water and improved sanitation such as toilets, sewerage and septic systems, and latrines, in rural and urban areas.

Through such efforts, Ghana is making steady progress toward the United Nations Millennium Development Goal (MDG) for safe drinking water. According to a 2009 World Bank study, Transforming Africas Infrastructure, the country is one of only four (and one of two low-income) countries in sub-Saharan Africa on track to meet the goal by 2015.

Access to safe water rose from only about half of the population in 1990 to 82% in 2008, according to the World Health Organization/UNICEF Joint Monitoring Programme for Water Supply and Sanitation.

Ongoing and recently closed World Bank-supported projects are on track to deliver safe water to 1.6 million people; all have used IDAs highly concessional financing or grants.

Such projects include the Small Towns Water and Sanitation project, which brought safe watermostly from underground