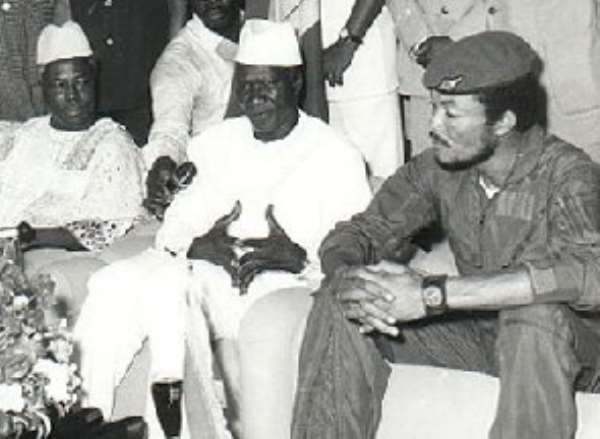 PNC condemns coup commemorationsIn commemoration of the unconstitutional overthrow of Dr. Hilla Limann by Flt Lt. Jerry John Rawlings some 29 years ago, the Youth Wing of the People's National Congress (PNC), has hit hard at the Rawlingses and the ruling NDC saying it is absurd for anyone to even try and offer reasons for toppling Limann's administration, much more celebrate the 31st December coup, adding that such people need to undergo a battery of psychological tests to check if they are sane.

An enraged National Youth Organiser of the PNC, Mr. Emmanuel Wilson, expressed the above thoughts in an interview during PeaceFM [email protected], when his views were sought on a planned lecture that will focus on the memories of Dr. Limann and his agenda.

The Youth wing of the PNC in collaboration with the Upper East Regional Executives is expected to organize a public lecture to commemorate the 29 years of the founder and leader of the PNC, Dr. Hilla Limann.

The lecture, to be held on Friday, December 31st, will mark the commemoration of the unconstitutional overthrow of Dr. Limann.

“We want to remind Ghanaians the way and manner in which ex-president Rawlings and his people overthrew a constitutionally elected government and ensured that all his agendas were truncated. We want people to know that it is illegal to engage in coup no matter the circumstance,” he noted.

The PNC National Youth Organiser was of the view that the lecture will offer Ghanaians a better understanding of events surrounding the 31st December coup for them to juxtapose that with the “reasons” being given by ex-president Rawlings regarding the overthrow of Dr. Limann. According to him, it is absurd for anybody to even try and justify it much more celebrate the day.

“The NDC says overthrowing Dr. Limann was a house cleaning exercise; if a thief comes out to give you a reason for stealing, we need to undergo a battery of psychological tests to check if the person is sane. What is wrong is wrong and will forever be wrong but after the meeting tomorrow; the public will know whether or not the excuses being Rawlingses offered are tangible for doing the wrong thing,” he stated.

He further expressed his disappointment in the NDC and the Rawlingses for continually celebrating 31st December even after it was declared constitutionally unwise to publicly revel in the day.

The lecture will take place in Bolgatanga at 10 am.