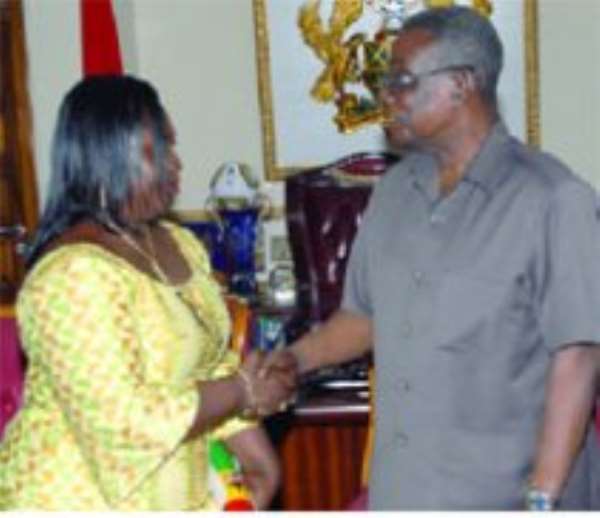 President John Evans Atta Mills yesterday advised his counterparts in leadership to accept the verdict of the people when it is expressed through the ballot box.

Receiving the Ethiopian Ambassador to Ghana, Mr Cham Ugala Uriat, to the Castle, Osu, President Mills explained that since power and authority resided in the people, politicians should come to terms with the outcome of polls and refrain from indulging in acts that had the potential to plunge their countries into mayhem.

Mr Uriat had called at the Castle to bid the President farewell after his six-year duty tour of the country.

President Mills used the occasion to stress that the masses should always have a say in the management of their country, especially in elections, adding that politicians should learn to accept their outcome whether it was favourable to them or not.

He asked African leaders to take a cue from Ghana’s democratic credentials. He implored politicians to draw important lessons from countries which had been plunged into atrocious conflicts and learn to accept defeat graciously and respect the voice of the people.

President Mills traced the bond between Ghana and Ethiopia to the days of Ghana’s Founder and first President, Osagyefo Dr Kwame Nkrumah, and Ethiopia’s Emperor Haile Selassie and said the two countries were the trailblazers of the continent’s emancipation and unity.

For his part, the outgoing Ambassador thanked the government for the support provided him during his stay in the country.

He commended the country for its democratic credentials, stressing that Ghana had become a beacon of good democratic practices on the continent.

Mr Uriat also praised President Mills for instituting several social and economic interventions which, he said, were gradually transforming the lives of the people.

At a separate function, President Mills swore in Ghana’s Ambassador-designate to Guinea, Mrs Beatrice Rosa Brobbey, at the Castle, after which Mrs Brobbey swore the Oath of Allegiance, the Oath of Secrecy and the Official Oath to the President.

He, therefore, asked government functionaries to “deploy all their talents towards serving the interest and aspirations of the vast majority of the people”.

He said the masses handed over the mandate of administering the country to the National Democratic Congress (NDC) not for the sake of the party but to offer the party the opportunity to improve their living conditions.

President Mills said the electorate would return the government to power in the 2012 poll only if it was able to provide better social and economic amenities to improve their material and social conditions.

He said the yardstick that the people would use to judge the performance of the government was whether or not it was able to improve their lot during its tenure of office.

The President called for regular interaction between government functionaries and the people to engender public confidence and goodwill in the government.

He said Ghana and Guinea had special relations which dated back to the late 1950s, stressing that Dr Nkrumah and Mr Sekou Toure had been front-runners in the continent’s liberation struggle.

For her part, Mrs Brobbey thanked President Mills for the confidence reposed in her and pledged to discharge her work to the best of her ability.