Ivory Coast 'on edge of genocide' 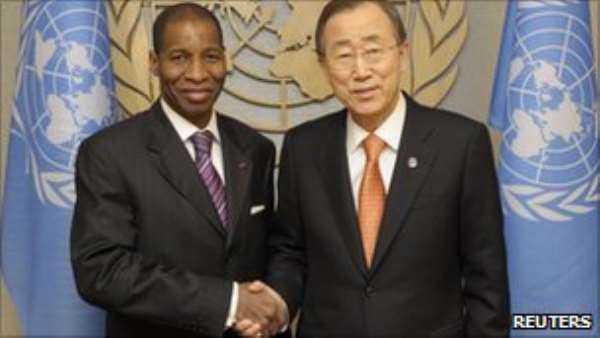 
Ivory Coast's newly appointed ambassador to the UN has warned the country is "on the brink of genocide".

In a TV interview, Youssoufou Bamba said there had been large scale violation of human rights as a result of the ongoing political unrest.

Laurent Gbagbo is refusing to step down despite his rival, Alassane Ouattara, being internationally accepted as the presidential election winner.

The UN has accused state media of inciting hatred against it.

Mr Gbagbo has said Mr Ouattara's victory in November was illegitimate. Both men have been sworn in as president.

Mr Bamba, who was appointed by Mr Ouattara, was formally welcomed at the UN's New York headquarters on Wednesday, solidifying UN support for Mr Ouattara.

At a press conference, Mr Bamba said Mr Ouattara had been elected in a "free, fair, transparent, democratic election".

"To me the debate is over, now you are talking about how and when Mr Gbagbo will leave office," he said.

Mr Bamba said Mr Ouattara's main concern now was the "massive violation of human rights" in the past few weeks.

"We think it's unacceptable. Thus, one of the messages I try to get across during the conversations I have conducted so far, is [that] we are on the brink of genocide."

Mr Bamba said some houses had been marked according to the residents' tribal background, and that he was concerned about what could happen next.

"Something should be done," he said.
'Final assault'
Mr Bamba said he hoped to meet with every member of the UN Security Council and "explain to them the gravity of the situation".

"The declarations I hear on the RTI are concerning us and shocking us, because they clearly instigate the population to turn against ONUCI [UN mission in Ivory Coast]," he said.

He said an incident where a peacekeeper was wounded with a machete when his patrol was encircled by angry crowds was a "direct consequence of all the appeals to hatred, lies and anti-ONUCI propaganda".

On Wednesday, the presidents of Benin, Sierra Leone and Cape Verde left Ivory Coast without having reached deal with the two rivals.

The leaders had been sent by regional bloc Ecowas, which had threatened in a statement to send in troops to force Mr Gbagbo to step down.

Ecowas said the three men would return to the country on 3 January for more talks.

Despite international support, Mr Ouattara and his Prime Minister Guillaume Soro remain holed up in a hotel in the main city of Abidjan, protected by UN forces.

Supporters of Mr Gbagbo, known as "young patriots", have threatened to storm the hotel.

"They should prepare themselves very well because we are thinking about totally liberating our country, and soon I will launch the final assault," he said.

Mr Ble Goude is renowned for his fiery rhetoric and has reportedly made such threats before without carrying them out.

But analysts have warned that inflammatory rhetoric could help push the nation back into civil war, seven years after a previous conflict resulted in it being divided between a rebel-run north and government-controlled south.

The UN has some 9,500 peacekeepers in the country.
Mr Gbagbo has told them to leave, accusing them of interfering in Ivorian affairs. But the UN has refused to do so.

Mr Ouattara was initially declared the winner of the elections but his victory was overturned by the Constitutional Council.

The Council, led by an ally of Mr Gbago, ruled that votes in parts of the rebel-held north loyal to Mr Ouattara were invalid.