People with a busy social life 'have bigger amygdala' 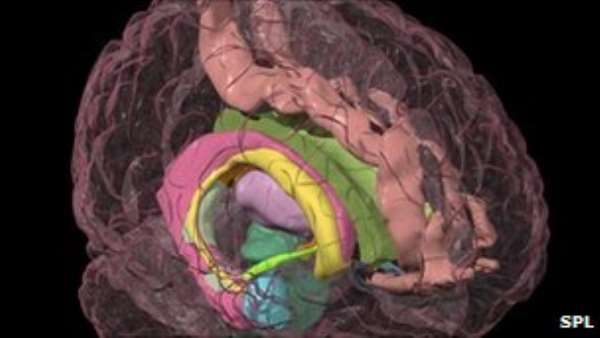 
People with a busy social life appear to have more volume in a specific part of the brain, scans show.

Research in Nature Neuroscience suggests the area - the amygdala - may have evolved to handle social networks.

In a study of 58 people, taking into account age and total brain size, the US team found significant differences in the amygdala's size in people with larger, more complex social networks.

This region has long been linked with emotional and mental state.

The work was carried out by a team led by Dr Lisa Feldman Barrett of the Massachusetts General Hospital and Harvard Medical School, Boston, US.

The scientists asked the healthy volunteers to list their contacts and social networks, then looked at the structure of the brain using magnetic resonance imaging.

"We found that amygdala volume correlates with the size and complexity of social networks in adult humans," they write in Nature Neuroscience.

"These findings indicate that the amygdala is important in social behaviour."

The findings add weight to previous studies which suggest that the amygdala is important for social behaviour.

They suggest this part of the brain might have evolved partly to help deal with humans' increasingly complex social life.

Dr Lisa Feldman Barrett told the BBC: "A larger amygdala probably enables humans to more effectively identify, learn about and recognise social and emotional cues in each other, allowing us to develop complex strategies to get along and get ahead in life."

She said further research was underway to try to understand more about how the amygdala and other brain regions are involved in social behavior in humans.

They are also investigating how abnormalities in these brain regions may impair social behaviour in neurological and psychiatric disorders.