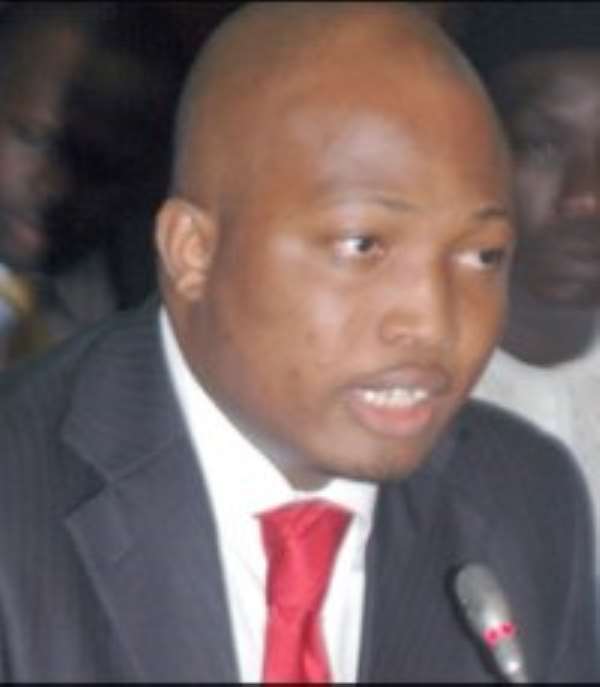 Maybe Ghana's substantive Information minister, Mr. Akologu John Tia, ought to have a sit-down with Mr. Samuel Okudzeto-Ablakwa, one of his two official deputies, one of these days to seriously lecture the latter about the functional and/or rhetorical protocol for a deputy Information minister of state. Or better yet, the ministry could do itself remarkable favor by commissioning the composition and publication of a procedural handbook containing guidelines by which its key operatives ought to officially conduct business for the ministry and the government at large.

For other than his stentorian rambunctiousness, there is not much that Mr. Okudzeto-Ablakwa could be said to have done in his capacity as a deputy Information minister that inspires the admiration of the Ghanaian public at large. Interestingly, even as a loudmouthed columnist on Ghanaweb.com, Mr. Okudzeto-Ablakwa did not come off as a remarkably critical thinker. And so even while it was quite predictable, nonetheless, his appointment as deputy Information minister by President John Evans Atta-Mills was rather surprising.

I mean, the fact of the matter is that while I could vividly fathom the young man wielding a megaphone and dryly touting the virtually nonexistent achievements of the Atta-Mills government at either Kumasi-Kajetia or the Kwame Nkrumah Circle in Accra in one of the hulking mobile vans of the Information Services Department, the notion of Mr. Okudzeto-Ablakwa as a deputy Information minister of Ghana is one that I am still excruciatingly struggling to get used to.

In recent months, even when he has “heroically” assayed the role of a statesman, rather than the hard-driving political upstart that he decidedly and effectively is, he has ended up sounding, at best, benignly comical and at the worst simply grotesque. And this is being painstakingly charitable on the part of this writer. A typical instance was when Mr. Okudzeto-Ablakwa attempted to publicly commend Nana Akufo-Addo, the current presidential candidate of the New Patriotic Party (NPP), for decently refusing to use his remarkable political influence as a cabinet member of the Kufuor administration to snap up landed public property on the cheap. Within the next breath, Mr. Okudzeto-Ablakwa was faulting Nana Akufo-Addo for not having forcefully and effectively prevailed on his colleagues and fellow partisans to follow suit, almost as if the former Foreign Minister had any say-so on the matter, besides his own conscientiously patriotic decision not to misappropriate public property and thus grossly misplace his own public trust.

Maybe if he first wrote down his thoughts on issues of relevance to his portfolio, for starters, as well as issues of moment to the government at large, Mr. Okudzeto-Ablakwa could really begin to look and sound like the significant and respectable key political figure that he desperately appears to be craving. Then, between the commission of his thoughts to paper (or even the screen of his computer notepad) and the infantile impulse to parry off, or riposte, the least critical remark and/or comment unleashed at the Atta-Mills government, he would have healthily afforded himself ample time for reflection and the opportunity to craft constructive rejoinders to critics of the government who may be deemed to be largely motivated by abject cynicism.

In the gaping absence of the foregoing admonishment, what the deputy Information minister appears to have succeeded in doing thus far is make an avoidable laughing stock of himself and his immediate boss.

The man also appears to be such a poor fit (largely the result of troubling ministerial default) for the portfolio of Deputy Information Minister that the keen observer cannot but be forced to wonder whether his immediate superiors are not equally ill-starred. I mention “immediate superiors” because Mr. Okudzeto-Ablakwa has had two bosses in two years, neither of whom has appeared capable of effectively reining in this obtrusively exuberant political climber. In so defaulting, both Ms. Zita Okaikoi, his first boss, and Mr. Akologu John Tia, my dear brother from Gambaga (and I also have a cousin called Sintim Bukari from Tamale), the current Information Minister, have readily come off as nominal bosses in perennial search of their comfort zones within the ministry, as it were.

Or maybe the real strategy here, and I have hinted at this before, is to render the Information ministry virtually rudderless until such a time that its functional, or de facto, boss is officially knighted or confirmed to the same.

As for Mr. Agyenim-Boateng, the least said about his sorry situation the better. For it quaintly appears that this relatively more sober “Second Deputy” Information minister was casually factored into the proverbial equation, as a sort of “an afterthought deputy information minister,” in order to achieve some bizarre sort of ethnic balance.

And while he may understandably not take kindly to his highlighted designated as a second-bananas, as it were, Mr. Agyenim-Boateng has effectively rendered himself as such. And were he as smart as those Akyem-Asiakwa boys with whom I grew up, he would have long ago demanded a transfer to a more conducive portfolio. As it stands, he could not have effectively rendered himself any more virtually irrelevant if he had taken the job of a luggage porter at Kumasi-Kajetia.

Anyway, what inspired this writing was a news article captioned “Deputy Information Minister Reacts to Chronicle,” which appeared in the Ghanaweb.com edition of Dec. 21, 2010, in which Mr. Okudzeto-Ablakwa was reported to have vehemently denied that the government's recall of some 375 “diplomatic” passports had anything to do with official suspicion of some of the holders having been deeply mired in narcotics drug-trafficking in the country, as recently revealed by the apocalyptic aftershocks of the “Wikileaks Earthquake.”

Instead, Mr. Okudzeto-Ablakwa insists that the decision recalling the “diplomatic” passports – largely held by prominent private citizens, the highly connected and government operatives – had been taken in 2009 “as part of efforts by the Atta-Mills government to fight against the drug menace in the country.” What is worth observing here is that whether the decision to withdraw the 375 “diplomatic” passports was taken in 2009 or in the recent wake of the Wikileaks Earthquake is decidedly beside the point; for what is eerily clear here is that quite a remarkable number of “diplomatic” passport holders in Ghana appear to have a far different understanding of diplomacy than may be officially presumed.

Still, what is even more devastating, both for the image of President Atta-Mills and his ruling National Democratic Congress (NDC), on the one hand, and the country at large, is the Wikileaks report which quotes “President Mills…as having told the American Ambassador in Ghana, during a private conversation[,] that elements of his government had already been compromised, and that officials at the [Kotoka International Airport] [had made a habit of tipping] off drug traffickers about operations there” (Modernghana.com 12/21/10).

If the preceding is accurate, then, needless to say, going into Election 2012, the NPP has ample grist on which to seriously impugn the routinely and imperiously presumed personal integrity upon which President Atta-Mills has predicated the legitimacy of his leadership.

What ought to equally disturb Ghanaians, however, is the fact that neither the ruling National Democratic Congress, under the stewardship of both the offensively self-righteous Mr. Jeremiah John Rawlings and the sanctimonious Dr. John Evans Atta-Mills, nor the New Patriotic Party, under even the unquestionably far more pragmatic Mr. John Agyekum-Kufuor, appears to have optimally fought against the specter of narcotics drug-trafficking.

*Kwame Okoampa-Ahoofe, Jr., Ph.D., is Associate Professor of English, Journalism and Creative Writing at Nassau Community College of the State University of New York, Garden City. He is a Governing Board Member of the Accra-based Danquah Institute (DI) and the author of a forthcoming volume of poetry titled “The Obama Serenades.” E-mail: [email protected]