When a young man refuses to pay road tolls 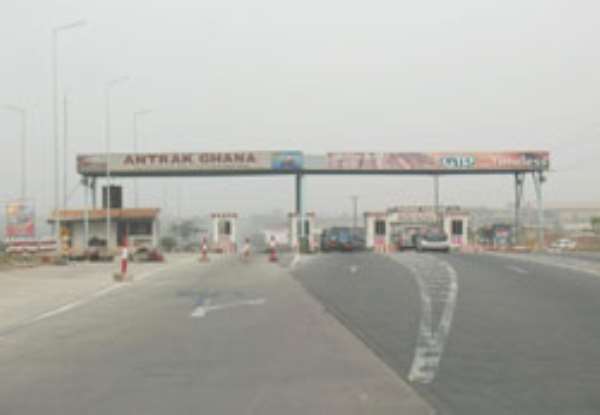 He saw it as an anathema. 'Why should I pay toll. I will never pay,' screamed the young man.  Naturally, those travelling with him were baffled.

When the Minister of Roads and Highways, Joe Gidisu, announced a 500 to 1,000 percentage increases in road tolls, he sold it as a means of raising money to repair dilapidated roads, and to construct more roads in both the western and eastern corridors, in pursuant of the 'Better Ghana Agenda' of the former law lecturer.

One pronouncement that appeared to have soothed the pain of commuters forking out the new fares was a pledge by the Minister to render weekly accounts of the takings at the various toll booths across the country. Nearly one year after the promise, Ghanaians are still waiting on the accounting aspect of the exercise. Like many promises made in the name of the party, the realisation is on hold, which brings Alfred Abayeteye to mind.

So far, he is the only person seeking protection under the umbrella who has been candid on the issue. Party pledges, according to the Honourable Member for Sege, are not legally binding.  Asiedu Keteke, the Ashanti Regional Youth Organiser of the party, though, intends to keep his promise.

He has never paid any toll fares since President John Evans Atta Mills was inaugurated at the Independence Square on January 7, 2009. And to demonstrate his powers as an NDC organiser, Asiedu Keteke waved the driver of the vehicle, in which he was travelling from Ejuratia in the Afigya Kwabre District of the Ashanti Region to Kumasi, on when the vehicle attempted to stop at the toll booth at Aboaso.

Initially, newsmen on board were baffled. With what authority does the young man defy standard instructions on road usage? It was then the Deputy Regional Organiser said it loud and clear that the presence of NDC officials in the vehicle gave all of them immunity against the toll rates.

It has always been difficult to rationalise the behaviour of footsoldiers on the march. Rationalising the power with which footsoldiers go about ordering officials from their offices, and keeping National Health Insurance Scheme offices under lock and key, is something that has defied logic.

Apparently, the directive from the Head of State that ministers, district chief executives and other state functionaries should factor footsoldiers in any equation in the governance scheme, is being interpreted to the letter. It means that so long as the umbrella covers the Castle, party agents are supreme. When it comes to forking out money at toll booths, the paying agents never include those seeking protection under the umbrella.

Apparently, the booths were made for those of us, the wretched of the earth, who are required to fork out our hard-earned resources to pay, so that roads could be maintained for the lords of Ghanaian politics to use.

If it was not so, I would like to know, as a matter of urgency, from Joe Gidisu, through to the party hierarchy, when would anybody call Asiedu Keteke to order?  There cannot be many Asiedu Ketekes who are regional youth organisers of the party in the Ashanti Region. It should not take a fortune and a million years to locate his whereabouts, for the Youth Organiser to throw more light on his ability to defy orders.

Once upon an election, Ashiedu Keteke was a constituency in Accra. It encompassed present day Ododiodoo and other parts of the capital city.  The constituency was won by the United Nationalist Party (UNP), led by Bannerman.  The party claimed one other seat in Accra, taking their total tally in the 1969 elections to two.

The Progress Party that formed the Government of the Second Republic won 105 of the 140 seats available.

On the campaign trail, UNP supporters shouted: 'Ame baa ba se.' - pronounced Abaa ba se (I am not an authority on the Ga Language, but my friends tell me it means: They will come behind.)  Never mind the fact that the party nearly ended up at the bottom of the heap.

In those days, when Afro Gbede founded the National Alliance of Liberals (NAL), there was so much money floating about at the rallies of the party, that supporters of rival political entities devised clever means of getting their share of the spoils, while remaining resolute in the support of their traditional parties.

Those were the days when elections were fun. It certainly was before Jerry John Rawlings burst on the scene and sent Ghanaians to bed before the sun could set. Woe betides you if you were seen outside your home during curfew hours. Any part of the body was a legitimate target for the military belt. That was the punishment for the few who were lucky enough to escape the real brutality of man's inhumanity to his fellow man.

Many were the lives that were lost. As many as 300 Ghanaians still cannot be accounted for. In all the endurance, Ghanaians were told that the revolution launched by Jerry John was going to end all discriminations, and lead to the economic paradise that had been lost to the politicians of old.

It is a credit to the kind of revolution Jerry John Rawlings launched that the political party that he founded after 11 years of torture, is now dividing society even more sharply.

According to Asiedu Keteke, he would not pay toll fares simply because he is a member of the party Jerry John Rawlings founded, and that party is in power. Forget about the fact that the winning margin that took President John Evans Atta Mills to the Castle could not have won Ayorkor Botchway, a Parliamentary seat at Weija. Meanwhile, as many as 520,000 ballots, equivalent of almost the total votes available in the Upper East or Upper West regions were declared spoilt.

It is the sign of the times that those who follow the political party Jerry Rawlings founded, after subjecting Ghanaians to the kind of atrocities previously unknown in the Ghanaian political establishment, are beginning to feel that they are more superior to those of us – the wretched of the earth.

Asiedu Keteke says he does not pay toll fares. Dr. Kwabena Adjei, NDC National Chairman,   was in the news not too long ago, with the doctrine on 'several ways of killing a cat.'

The small matter of the woman on the front seat of the four wheel-drive vehicle, which ploughed through human beings at a check-point, is one of the features of the Atiwa bye-election. As you read this article, Anita de Soosoo is minding her own business. She has never had a tap on the door from police officers investigating the maiming of human beings at Abomosu, in the run-up to the vote on the Atiwa Scarp.

At my age and disposition, recalling events is not one of my strongest attributes. All the same, I can state with authority that the NDC activists, who murdered in the name of the party at the Agblobloshie Market, are still selling their wares at the market nearly two years after dispatching some New Patriotic Party sympathisers to their early graves.

It is one of the evolving political doctrines of our time that at the time the President of the Republic is calling on unity of purpose as a condition for development, party activists are getting away with murder, simply because the perpetrators are shoring up his slipping reputation as the leader of this society.

The umbrella might have been conceived as a symbol to bring a group of people together. Whether by design or purpose, it is also turning out as a cover for the miscreants of society!

Tomorrow, Ebo Quansah will review the year. '2010 In Retrospect' will blow your mind away.