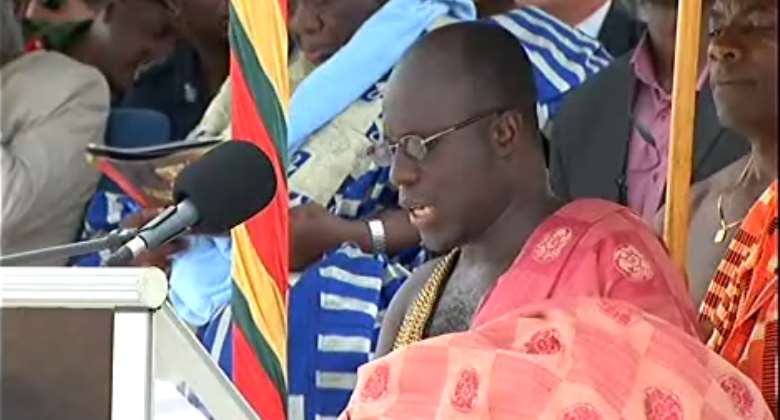 
Awulae Attibrukusu III, President, Western Regional House of Chiefs, has urged the chiefs and people of the region to co-exist peacefully with oil companies to ensure a successful oil and gas business in the region.

He said there would not be any meaningful socio-economic development in an atmosphere of chaos and misunderstanding, and therefore, called for peace, tranquility, brotherly love, discipline among the entire citizenry.

Awulae Attibrukusu, who is also the Paramount Chief of Lower Axim, gave the advice at the first ever Oil Regatta celebration organized by the Tullow Oil Company and its Jubilee Partners at New Takoradi as part of the activities marking the inauguration of the Jubilee Oil Fields at the weekend.

The event brought together 15 canoe peddling teams from various fishing communities in the region who competed in canoe peddling, tug of peace and eating.

The team from the New Takoradi emerged victorious in the canoe peddling competition and took away GHc1,500 as winning prize.

In addition, the Metropolitan Chief Executive for the Sekondi-Takoradi, ,Kobina Pra Anan and the Member of Parliament for Takoradi, Kobena Okyere Darko-Mensah both added GHc2,000 and GHc2,500 respectively, to the prize money resulting in a take home
package of GHc6,000.

The teams navigated 2 kilometers from the shore and back amidst cheers from their respective supporters who travelled from far and near to offer support.

Awulae Attibrukusu noted that such competitions could result in social cohesion and commended the Tullow and its partners for initiating the competition.

He reminded government to keep its promise on improving the social infrastructure in the region to ensure accelerated development.

He also called on the Tullow Oil Company and its partners to institute Educational scholarship Scheme to assist brilliant but needy students in the region.

The President of the Regional House of Chiefs appealed to the oil companies to invest in education by building more school building since there were a lot of 'under trees schools' in the region.

Awulae Attibrukusu urged the oil companies to provide alternative livelihood for the fisher folks in the region since they could no longer fish in the vicinity of the oil rig.

The General Manager of Tullow, Mr. Joseph klemesu, said his outfit sponsored the event as part of its corporate social responsibility to foster social cohesion and peace among the people in the region.

He said Tullow would sponsor the canoe peddling competition annually.

Mr. Klemesu said Tullow was collaborating with the Takoradi Polytechnic to run oil and gas related courses for the Ghanaian youth.

According to him, it would enable more local people to take key positions in the oil and gas industry in the near future.