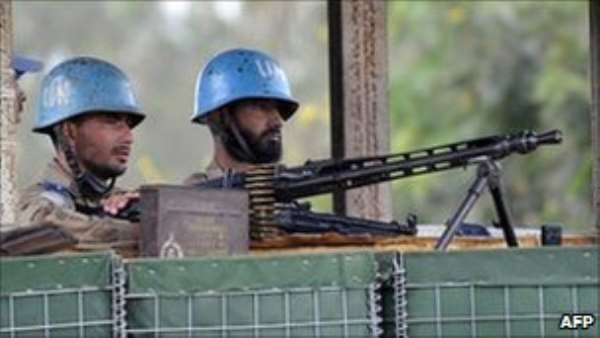 His spokesperson accused UN and French troops of colluding with former rebels.

The UN and major powers have recognised Mr Gbagbo's rival, Alassane Ouattara, as the winner of the 28 November poll. Mr Gbagbo insists he has won.

Mr Ouattara is currently under UN protection at a hotel in Abidjan.

In a statement read on national television on Saturday, government spokeswoman Jacqueline Oble said Mr Gbagbo had "requested the immediate departure of the Onuci [UN mission] and the French forces supporting it".

The UN force, the statement added, had "interfered seriously in the internal affairs of Ivory Coast".

Earlier, the UN said one of its patrols had come under fire as it entered the mission compound in Abidjan, the country's main city.

Sanction threat
Early on Friday, opposition supporters were arrested in Grand Bassam, about 30km (20 miles) east of Abidjan, and there are reports of several people being killed there.

Mr Ouattara's supporters have said they would again to the streets again, following gun battles which left 20 dead in Abidjan on Thursday.

The UN Security Council warned that all sides would be held accountable under international law for any attacks against civilians.

The United Nations, the US, former colonial power France, and the African Union have all called on Mr Gbagbo to stand down.

French President Nicolas Sarkozy on Friday said he should quit by Sunday or face EU sanctions.

But Mr Ghagbo says the election was rigged by rebels who still hold the north after the civil war in 2002-03.

The BBC's John James, in Abidjan, says tension has been building since the head of the UN peacekeeping mission, Choi Young-Jin recognised opposition leader Alassane Ouattara as the rightful winner of the election.

A peace deal signed by all sides gave the UN a role in certifying the election results.