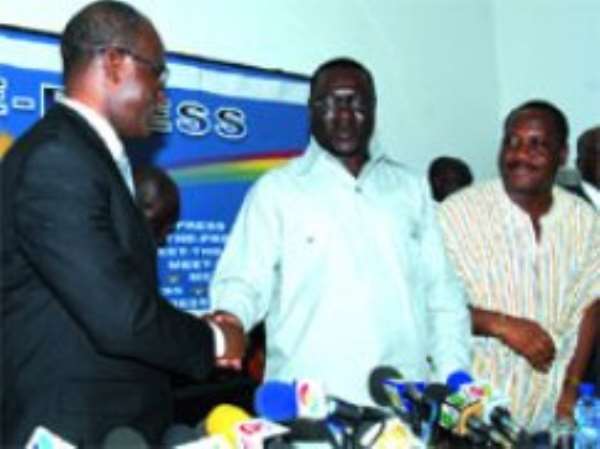 The Ministry of Transport will next year introduce speed cameras at vantage points throughout the country to improve road safety.

In that direction, a service agreement has been signed with some operators under the public-private partnership (PPP) scheme for work to begin.

Transport Minister, Mr Mike Hammah, made this known when he took his turn at the weekly meet-the-press programme in Accra Tuesday.

He described the carnage on our roads as unacceptable and identified old and dilapidated commercial vehicles plying the roads as part of the problem, adding that those vehicles must be removed.

He reiterated that when the new road traffic regulation finally became law, a ban would be placed on the use of mobile phones while driving, while everything possible would be done to reduce the tragedies on our roads, if not eliminate them completely.

In addition, Mr Hammah said the ministry would collaborate with the National Youth Employment Programme (NYEP) to engage some youth for road safety education in schools as part of the road safety programme.

The Transport Minister said, the proposed law had provision to ensure disability friendliness in commercial vehicles to make things easier for the physically challenged who have had to struggle to access public transport.

To make it easier for the public to travel, the government supplied 50 additional buses to the Metro Mass Transit (MMT) in March 2010, he said.

On the rail sector, the minister indicated that the ministry had plans to rehabilitate the Western rail line, as well as existing sub-urban railway lines, extend the rail line from the Tema Port to Japan Motors in Accra, conduct feasibility studies and the construction of the proposed ECOWAS rail line on the Aflao-Winneba-Cape Coast-Omapa route, modernise the Eastern line comprising the Accra-Kumasi-Paga rail lines, among other projects.

On the Boankra Inland Port project, Mr Hammah said the installation of utilities, which was the first phase of the three-phase project, was completed, a development which had opened the way for companies in the private sector to show interest in the long-awaited project.

He stated that three patrol boats had been acquired for surveillance on the Volta Lake, while 2,300 lifeguards had been trained to save lives on the lake.

He touched on the continuation of the modernisation of the Kotoka International Airport (KIA), a project to develop the Tamale Airport to serve as an alternative to the KIA and also ways to encourage more domestic airlines with opportunities for neighbourhood flights in line with the Yamoussoukro Decision and the Banjul Accord.

The ministry has the mandate to ensure a safe, efficient, reliable, effective and accessible transport system with the provision, expansion and maintenance of infrastructure and services to make Ghana a transportation hub in the sub-region.