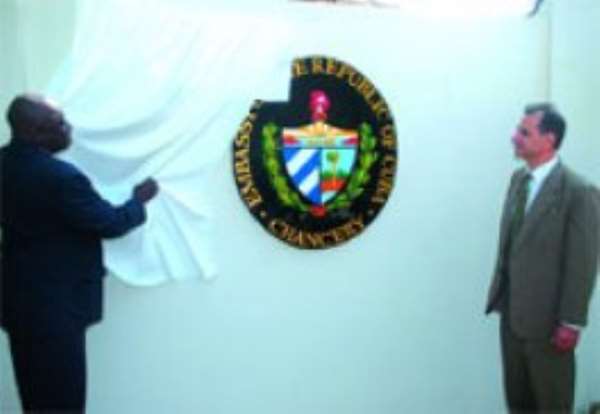 The Ghana Government has handed over a new Chancery building to the Cuban Embassy in Accra in fulfilment of an agreement between the two countries.

Under an agreement signed in April 1982, Ghana and Cuba agreed on a reciprocal arrangement under which Cuba would provide the Ghana Embassy in Havana with a set of buildings for use as Chancery, Ambassador's residence, as well as residences of the other diplomatic staff.

In turn, Ghana was to give the Cuban Embassy in Accra a set of buildings for similar purposes. Cuba has since fulfilled her part of the agreement.

Performing the handing-over ceremony, Ghana's Foreign Minister, Alhaji Muhammad Mumuni, said, 'Indeed, the setbacks and lapses we have encountered in striving to conclude the arrangements have always been a source of considerable concern to our government.”

He welcomed the handing over as a commitment to the long-standing relationship between Ghana and Cuba, adding, 'With vision and foresight, even small developing countries such as Cuba and Ghana can co-operate meaningfully and fruitfully to their mutual benefit.'

Alhaji Mumuni said although there had been setbacks to handing over the Chancery building to the Cuban Embassy, he recognised Cuba as a symbol of hope.

'The invaluable interventions, especially in the educational and health sectors, not only in our country but throughout the developing world have contributed to the well-being of millions,' he noted.

The Ambassador of Cuba in Ghana, Dr Miguel Perez Cruz, said the handing over of the Chancery building guaranteed the future development of political and diplomatic co-operation between the two countries.

'This is an excellent opportunity to renew our co-operation with the government and people of Ghana,' he said.