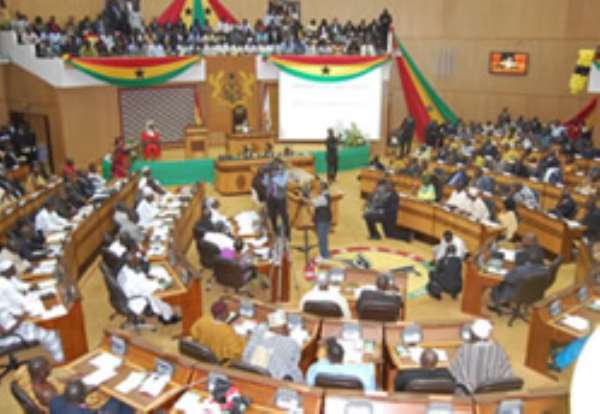 
The Civil Society Platform on Oil and Gas says it will seek a review of the amendments to the Petroleum Revenue Management Bill that allows the government to use about 70 per cent of the country's oil revenue as collateral.

The platform said it was aware that before amendments to the bill were concluded, the government was concluding a €500 million facility from the Dutch government in support of the activities of the Ghana National Petroleum Corporation (GNPC), with the oil revenue as collateral.

The Chairman of the platform, Dr Steve Mantheaw, said civil society groups were disappointed with government's policies and regulatory framework over the oil and gas sector even as the country celebrated the pouring of the first oil on Wednedsday.

He said although the platform had been invited to the activities to mark the pouring of the first oil, serious advocacy would continue to seek for reviews to inimical legal and regulatory frameworks in the oil and gas sector, such as the use of oil revenue as collateral, to ensure that Ghanaians were not short-changed with the advent of the oil.

Dr Mantheaw said the platform would closely observe to also test the preparedness of the Judicial Service in the oil and gas economy if operators of the oil fields flared the gas, a by-product of oil drilling.

Gas flaring has dire consequences on the environment. He, however, said information gathered by the platform was that gas would not be flared.

He described the use of the oil revenue as collateral as "unfortunate and ill-informed", emphasising the potential of that leverage of the government to become a licence for the contracting of loans and their mismanagement.

He said the argument used by the government and Members of Parliament on the Majority side for the amendments to be effected in Parliament, which was that the cocoa sector provided the precedent in the use of government resources for collateral, was misleading.

Dr Mantheaw pointed out that the cocoa sector was a renewable sector but the oil and gas sector was not.

"If you gamble with your oil today, you will not have it tomorrow, while, with cocoa, you can plant new trees," he emphasised.

He said with the same conviction that the Akosombo Dam was strategic, thereby ensuring its protection and insulation from being used as any sort of collateral, the oil should have been protected.

He was saddened that the country had lost sight of its convictions on what was strategic and should not to be exchanged for any gain and what was not strategic.

Dr Mantheaw said in spite of the amendments to the Petroleum Revenue Management Bill collateralising the country's oil, there was opportunity for the platform to lobby for a review of those amendments.