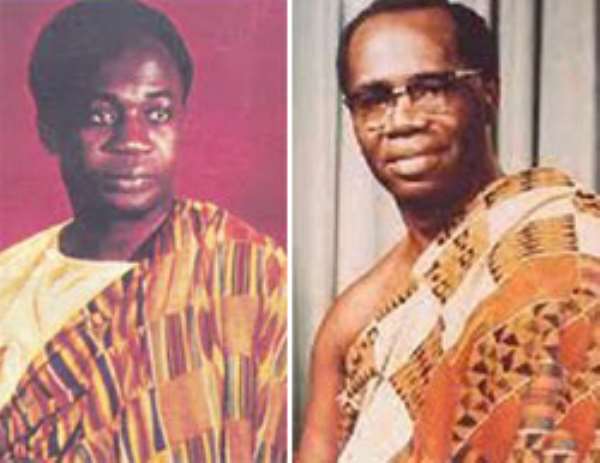 After over a century of frantic search for oil, the flow of the black gold in commercial quantity from the bosom of the earth will begin today, off the shores of Cape Three Points in the Western Region.

The original arrangement was for the sitting President to perform the ceremony, to be assisted by Mr. Kufuor and former junta head Jerry John Rawlings. At a point in time yesterday, indications were that the founder of the ruling National Democratic Congress (NDC) might not make it to the function.

Mr. Kofi Adams, Deputy Secretary of the party and official spokesman of former president Rawlings, told a number of radio stations that his boss arrived in the country yesterday, after a long trek, and that he needed to verify with him before making any categorical statement about whether or not the former leader of this country would honour the invitation from the state.

At the time of going to press, it was confirmed that former president Jerry John Rawlings would honour the invitation after all.

Ex-president Kufuor, on the other hand, was on an Accra FM station to acknowledge receipt of the invitation, with an assurance to all Ghanaians that he would be at the event.

Exploration for oil in the then Gold Coast began in 1898, and by the end of a hundred years in 1989, over one hundred wells had been dug, according to official literature on oil exploration in Ghana.

In 1970, Mr. Reginald R. Amponsah, Minister of Lands and Mineral Resources in the Progress Party regime of Prime Minister Kofi Abrefa Busia, took a can of oil to the old Parliament House in Accra, and announced to cheering members of the House that Ghana had struck oil off the shores of Saltpond, the capital of present day Mfansteman Municipal Assembly.

Initially, the Saltpond Oil Field was to produce 5,000 barrels of crude per day. But that estimate proved to be over-ambitious. Production of oil from Saltpond has been erratic ever since, barely averaging 1,000 barrels a day.

With crude oil purchases on the international market taking a chunk off the nation's resources for development, various governments, since the 1980s, have intensified the search for the black gold.

In 1983, the Provisional National Defence Council (PNDC) administration established the Ghana National Petroleum Corporation (GNPC), with the mandate to promote the exploration and production of crude oil.

Kosmos made the announcement in Accra, while Tullow and Anadarko made their announcements in London and New York respectively.

Ex-president Kufuor, who was the constitutional Head of State at the time, expressed appreciation to God about the discovery, saying the news should embolden and encourage all Ghanaians to be optimistic of the country's future.

'We pray that Kosmos will be successful, so that our country would not become a beggar in the energy sector anymore.'

Mr. Kwamena Bartels, Minister of Information at the time, said the Government had reached an agreement with the oil exploring companies on how to share the 'spoils' of the new oil find.

'The agreement had already been signed for the exploration to begin, and for us to be in a position to, not only get 10 percent carried interest, but GNPC which is representing the Republic of Ghana, would have the option to acquire an additional two and a half percent,' Mr. Bartels explained.

'But the real source of revenue for the country is the revenue income tax of 35 percent of whatever they earn from the production of crude oil. And that is what we would be looking at, in addition to a total of about 12.5 percent, apart from royalties of five percent, to be able to develop our nation.'

In 2008, the New Patriotic Party (NPP) administration gave the contract to a Singapore firm to construct a Floating Production Storage and Offloading (FPSO) vessel to begin exploration. The ship was converted from an existing tanker in Singapore.

When Prof. John Evans Atta Mills and his National Democratic Congress took over power in January 2009, much hot air was blown over the 3.5 per cent shares in Kosmos owned by the EO Group. Eventually, peace returned to the exploration field.

On May 1, 2010, the First Lady, Naadu Mills, commissioned the FPSO, and it was named after Kwame Nkrumah, first president of independent Ghana.

Explaining how the floating vessel was named after the first President of Ghana, Prof. Atta Mills stated: 'The Government and good people of Ghana have, after series of consultations with important stakeholders, decided to christen the FPSO Kwame Nkrumah, a name which inspires both young and old, politicians and non-politicians, scholars and ordinary people. The presence of the oil in Nzemaland in Western Ghana is God's gratitude to Dr. Nkrumah.'

Meanwhile, chiefs in the Western Region have fired the first salvo, in what is expected to be a long drawn-out battle for oil revenue throughout the country. The traditional leaders are asking for 10 percent of the oil revenue as development funds for the Western Region.  The request has divided opinion in the country down the middle. It is the hope of many Ghanaians though, that revenue from the oil exploration will unite, rather than divide the nation.