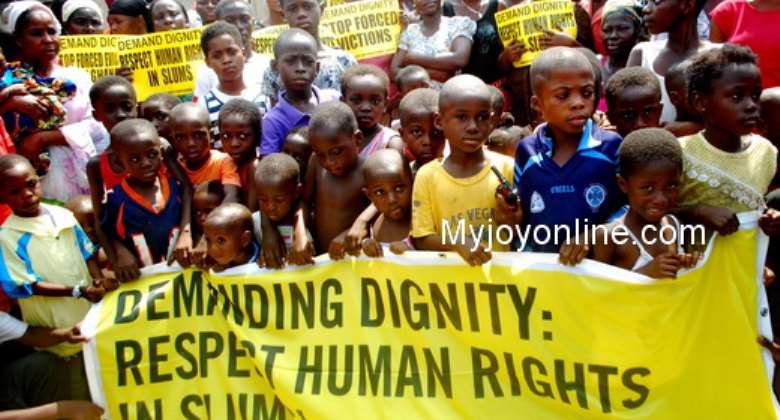 A section of the dwellers and their children at the press conference.


Rights group Amnesty International (AI) Ghana and the Women in Slums Economic Empowerment (WISEEP), an NGO, are appealing to the Accra Metropolitan Assembly and the Government of Ghana to stay an intended eviction of dwellers of the sprawling Agbogbloshie slums.

They say city authorities on December 1 and 7 drove megaphone-mounted vehicles through the slums announcing a December 14 ultimatum for dwellers to vacate the area and pull down their dwellings or be forcefully evicted to pave way for the redevelopment of Ghana's railway system.

The two bodies, while commending the government for initiating plans to develop the area with the ultimate objective of improving the lot of the citizenry, say the forced evictions, if carried out without interventions to assuage the harsh effects associated with such exercises, will negate all expected benefits.

They therefore are imploring the government, the metropolitan assembly and the railway authorities to tarry a while and contribute to the resettlement of the many thousands of dwellers whose already deplorable living conditions in the slums would only be worsened by the exercise.

At a press conference Saturday to appeal to the authorities to consider forced ejections as a very last resort to claiming the land (because all other means may have failed or are not workable), Messrs Lawrence Amesu, Director of Amnesty International Ghana and Mr. Frederick Opoku, Director of WISEEP said they were concerned about the negative consequences of forced evictions when they happen unplanned.

Among other negatives, the two organizations said forced evictions could lead to increased exposure to gender-based violence such as acts of physical and sexual abuse as well as harassment of women and girls in the affected communities, increased social vices such as prostitution and increased vulnerability to the deadly HIV/AIDS disease and other sexually related diseases, increased school drop-outs as parents are traumatized and especially when they lose their sources of income and therefore cannot cater for their children's education, plus increased streetism with its attendant social vices.

“We wish to draw the attention of the government to its avowed commitment to slum upgrading as spelt out on page 85 of its 2008 manifesto which recognizes the fact that slum existence is the results of rural - urban migration, limited supply of land and regulatory framework that fail to address the needs of the urban poor, of which the rail dwellers are no exception.”

Responsibility
Amnesty and WISEEP also drew the attention of the Government of Ghana to its responsibility and duty to “protect its citizenry from all forms of human rights abuses,” cautioning the government that “when this eviction threat is carried out without any plan of relocation of and protection for the railways dwellers, it will violate a broad range of human rights of the affected communities and persons, in particular the right to adequate housing, the right to privacy and the right to the security of the home.

“The plan to evict the railway dwellers will not only worsen the plight of the already precarious living conditions of the affected communities in this period of economic difficulties, but will also contradict and defeat one of the instrumental goals of the Millennium Development Goals, to be precise the Goal 7 states “.... Have achieved by 2020 a significant improvement in the lives of at least 100 million slum dwellers."

The rights groups urged the government, “...a party to the International Covenant on Economic, Social and Cultural Rights,” not to rush into “...evicting the railway dwellers without adequate alternative accommodation” because it “will lead to a gross violation of the fundamental human rights of the affected individuals.”

A section of the residents loss in thought even as the press conference progressed.

An aspiring assemblyman for the area, Bright Dzila, a broadcast engineer who attended the press conference with a good number of residents, pleaded with the government to help resettle the residents, many of whom he said had lived in the area for about two decades and whose children have nowhere else to call home.

“Many of the youth were born here and have lived here all their lives, if they are thrown out onto the streets, one can imagine their helplessness and the unpredictable menace they may pose to themselves and to the society at large. The many women you see here eke a living at the markets here, very hard working mothers but who live from hand to mouth. If they are forced out of their economic enterprises in the manner anticipated under forced evictions, I bet you we are staring a major disaster.”

He also urged the authorities to pick lessons from previous forced evictions where reclaimed lands were abandoned because the authorities were not ready to put the lands to any good use only for the evicted to find their way back, saying “in all these some patience would have averted the hardships needlessly visited on the people.”