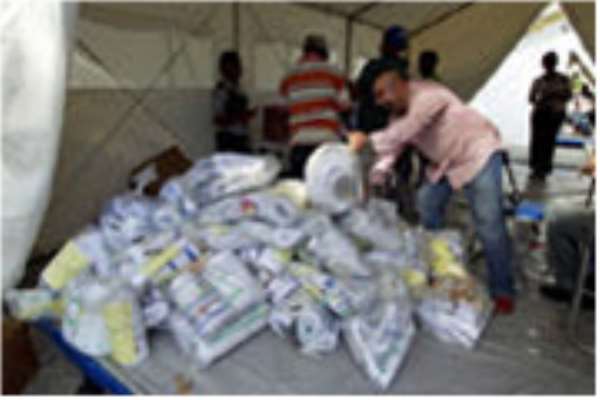 8 December - Secretary-General Ban Ki-moon today appealed for an end to violence in Haiti following the announcement of preliminary election results in a country that has already been ravaged this year by a devastating earthquake and a raging cholera epidemic. “A peaceful solution to the current situation is crucial not only to confront the cholera epidemic in the short-term but also to create the conditions in the medium term for recovery and development from the earthquake,” a statement issued by his spokesman said.

The statement voiced concern at allegations of fraud and noted that the results of the 28 November presidential and legislative elections are not final. “He urges all candidates to exhaust the formal remedies and legal procedures, which will allow a clearer picture to emerge,” it added. “This would be a solid base on which to move forward.

“The Secretary-General expresses his concern over the acts of violence that have taken place in the aftermath of the announcement of the preliminary results. He reminds all candidates that they have a personal responsibility to encourage their supporters to remain calm and to stop violence.”

According to media reports, thousands of protesters rampaged through the streets of Port-au-Prince, the capital, setting fire to the headquarters of the ruling government coalition, which they accused of rigging the results, after Tuesday's announcement that former first lady Mirlande Manigat and outgoing President Rene Préval's party candidate Jude Celestin qualified for the January presidential run-off by coming in first and second.

Popular musician Michel Martelly was close behind in third place, but thus excluded from the run-off and supporters set up burning barricades of timber, boulders and flaming tires.

Ever since the November vote Mr. Ban has been appealing for calm, warning that worsening security would hamper efforts to tackle the twin disasters that have already struck the poorest country in the Western Hemisphere this year.

The cholera epidemic, which first erupted in October, has already killed 2,120 people, according to Health Ministry figures, with over 44,150 others hospitalized, even as the country struggles to recover from the January quake, which killed 200,000 people and displaced some 1.3 million others, most of whom are still living in crowded and unsanitary tent camps.

The UN Office for the Coordination of Humanitarian Affairs (OCHA) reported today that although much work has been done, there is still a critical need, not only in the camps but throughout the country, to provide people with information on how to prevent cholera, which is transmitted through contaminated water and food, and how and where to get appropriate treatment.

Some 2.2 million children of school age in more than 20,000 schools need to be protected, particularly with safe drinking water and knowledge of good hygiene practices, it added, with the focus targeting teachers, students, and their parents.

In camps throughout the quake affected areas, hygiene promotion, distribution of water purification tablets, installation of latrines and sensitization campaigns figure high in the agenda. Nearly 190 Oral Rehydration Posts (ORPs), out of a planned total of 250, have been installed in priority camps to provide frontline cholera treatment.

Experts in water, sanitation and hygiene are urgently needed in some parts of the country, as are medical personnel and supplies, especially in remote or mountainous areas, OCHA said.

The UN has deployed a stabilization mission, known as MINUSTAH, with nearly 12,000 military and police personnel currently on the ground, since mid-2004 after then president Jean-Bertrand Aristide went into exile amid violent unrest.