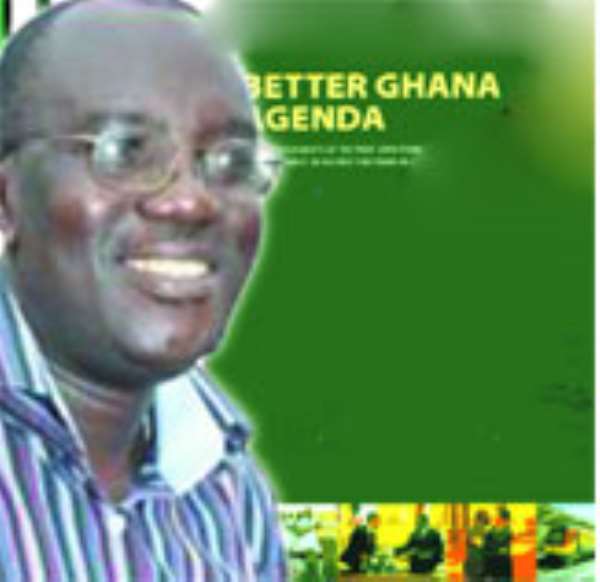 THE New Patriotic Party (NPP) has torn into shreds the National Democratic Congress (NDC) Better Ghana Agenda book, which the opposition party has christened 'Green Book' that lists 50 achievements of the Atta Mills government in the past two years.

To the NPP, the NDC government has rather perfected the art of deception, which was a sign of incompetence in the governance of the country. Addressing a news conference in Accra yesterday, the General Secretary of the NPP, Mr. John Owusu-Afriyie, contended that the NDC had created fear and panic in the country, following the publication of the book.

'What this document (Better Ghana Agenda) shows is that the NDC has given up on any hope of caring about the plight of Ghanaians; any hope of telling the truth. In fact, the book is an embarrassing litany of barefaced lies, quarter-truths, exaggerations, deceptions, and hijacking of projects undertaken by the New Patriotic Party,' he noted.

According to Mr. John Owusu-Afriyie, 'a glance through the book, would show that about half of the top 50 achievements are either about projects being planned or dreamed of, and the other half comprising mostly projects that were initiated by the New Patriotic Party, under the excellent leadership of then President J.A. Kufuor and his competent deputy, Vice President Alhaji Aliu Mahama.'

He noted that completed projects like the 100-bed hospital with a Malaria Research Centre at Teshie, Accra, were the ones that President Kufuor started and secured funding for their completion.

'With this uncharacteristic confession from a President who awarded himself an 80% mark for his first 100 days, President Mills has conceded that his first two years have been marked by broken promises.

That, at best, the wheels of the 'Better Ghana Agenda' have grinded slowly, even if in the wrong direction, with the poverty of the masses, the very people that he promised to care for, increasing every day.'

To Owusu-Afriyie, President Mills' Better Ghana Agenda can never be achieved on the altar of propaganda, lies, hypocrisy and a rudderless management of the nation's economy adding, 'He cannot tax his way out of the poverty he has plunged Ghanaians into, it would only lead to more and more poverty.'

The NPP's chief scribe rhetorically asked, 'How many hungry Ghanaian children could President Mills have fed with Ghana's money that he spent to print this NDC propaganda document and to buy the TV adverts and documentaries that we can expect our Christmas holidays to be disturbed with?'

He stated that a 39-page publication, compiled and presented by the Ministry of Information, was a phantom, which was similar to 1.6 million jobs said to have been created by the government, and made public by the Ministry.

Ordinarily, the NPP noted, one would support a smart decision to publish a book that highlights the achievements of the President Mills administration, because it would have been difficult for Ghanaians to know what the government had done, but the party was compelled to react because of the distortions.

'The achievements are such that one needs telescopic propaganda lenses to sight them on the ground. When achievements are lost to the sight, hearing and feeling of the people, it behoves on government, the sole claimer of those so-called achievements, to enlighten us, the seemingly ignorant masses, about its 'wonderful' deeds.'

Touching on the government's Single Spine Salary, this was what the NPP said, 'But, even after the 30% slash off these social funds, our numerous nurses and teachers have no reason to expect 2011 to be a year of action, in terms of their demand for better salaries being met.

Going by its own budget provisions, the Mills administration has no plans of migrating education and health workers onto an acceptable Single Spine Salary Structure before the end of the four-year term.

'Even in 2010, with the police and a few others being put on board the SSSS, not even the revised budget provision of GH¢3.46 billion could cater for them, because the estimated cost of implementing the 2010 SSSS was GH¢4.43 billion, leaving arrears of GH¢1.01 billion, with GH¢755 million of that being shifted to 2011.'

The NPP also accused the Atta Mills government of 'unashamedly' listing critical artery road construction projects, which were started by the Kufuor government, and have been stalled under the NDC, as some of their top 50 achievements.

The party stressed that instead of dealing with the news that their refusal to pay contractors was responsible for 20% of bad loans on the books of the country's banks, the NDC preferred to tout this plight of contractors and commuters as evidence of the Better Ghana Agenda.

Among the stalled road projects, Mr. Afriyie-Owusu listed, are the extension to the La-Teshie road, which has suffered long delays, the Oforikrom-Asokwa bypass (including an interchange at Timber Gardens), which was scheduled for completion last June, but is now not likely to be completed before 2012.

The NPP also denied that it was the Atta Mills government that transformed the Serious Fraud Office (SFO) into an Economic and Organised Crime Office (EOCO), with more powers and independence.

The party contended that it was President Kufuor's Attorney General, Joe Ghartey, who spearheaded the transformation, after studying a similar organisation in the United Kingdom.