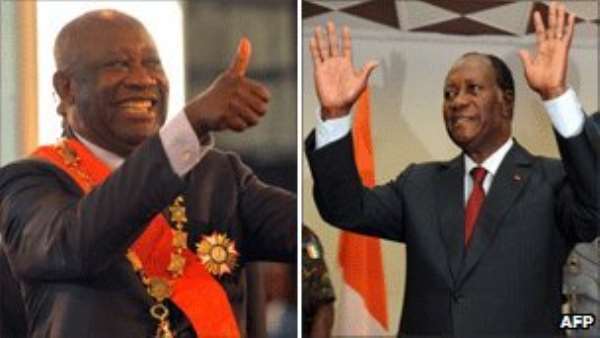 
Knox Chitiyo, head of the Africa programme at the Royal United Services Institute, considers the deadlock after Ivory Coast's disputed elections and asks: What happens next?

From the outside the Ivory Coast election looks like a classic case of an African incumbent refusing to stand down after losing an election.

There are, however, a number of complicating factors which may lead to a protracted struggle and which stiffen Laurent Gbabgo's resolve.

He has the support of the military and a significant percentage of the southern electorate.

He is basing his claim to the presidency on the dubiously revised 51% vote awarded to him by the Constitutional Council. The electoral commission said his rival Alassane Ouattara had won, with 54%, before the Council annulled a large number of votes from his northern stronghold.

The fact that the Constitutional Council has awarded him the majority vote and sworn him back into office is seen as constitutionally legitimising his tenure. Mr Gbagbo has in effect, masterminded a constitutional coup.

The security chiefs have also declared their loyalty to Mr Gbagbo. It is this combination of military support, nominal constitutionalism and some electoral support from the south which has convinced Mr Gbagbo that he can ride out the storm.

Mr Ouattara has also taken the oath of office and appointed a cabinet but the fact he was not sworn in has given Mr Gbagbo some ammunition to claim that it is Mr Ouattara, not he, who is the unconstitutional leader.

So Ivory Coast has two presidents and multiple paradoxes, the main one being that the legitimate president-elect has sworn himself in unconstitutionally while the defeated incumbent has refused to relinquish power and used the constitution to undermine democracy.

What next?
The Ivory Coast elections are about much more than promoting democracy; following the peace deals which ended the 2002-2004 civil war, there has been a fraught balance of power between the north held by the New Forces insurgents and the south held by the pro-Gbagbo security forces.

The election was thus also intended to promote national unity and the demilitarisation of politics in Ivory Coast.

Currently there is an unusually broad regional and international consensus that Mr Ouattara is the rightful winner. The UN, France, the US and the West African group Ecowas have all urged Mr Gbagbo to step down.

Given that the country has had a power-sharing government for the past four years and that both men have set up rival governments, there seems little likelihood that Ecowas would be able to push for yet another power-sharing coalition.

Both men have painted themselves into a corner which makes it unlikely that either can countenance "surrendering" executive office or being able to explain a "capitulation" to their followers.

More likely is that the region and its partners will try to negotiate an exit strategy with Mr Gbagbo and the various militaries in Ivory Coast.

Ecowas will not want to use force against Ivory Coast forces for fear of igniting a return to civil war, so they will use a combination of pressure - regional sanctions - and persuasive incentives to persuade Mr Gbagbo to step down now, or within a recognisable time frame.

There will also be discussions with Mr Ouattara to sound out whether he would be willing to temporarily put his presidential aspirations on hold and work in some form of short-term coalition with Mr Gbagbo.

Both outcomes are unlikely but not impossible.
Can sanctions work?
The likeliest outcome is that Mr Gbagbo remains president while facing increasingly severe regional and international sanctions and increased insurgency.

Co-ordinated Ecowas and international diplomatic and financial sanctions proved effective against coup leaders in Niger, Togo and Guinea in the past year or so.

The recent UN resolution on Ivory Coast will, if seriously implemented, put considerable pressure on Mr Gbagbo to step down sooner rather than later.

A broad range of diplomatic and financial sanctions could weaken the patronage system which has allowed the incumbent to flourish. The key word however is "serious" international sanctions have often proved to be porous. In this instance, UN would need regional input if they are to have teeth.

But it is not certain that the sanctions threat would immediately persuade Mr Gbagbo to step down, as he still controls many of the state levers of power.

An Ecowas-UN military operation to remove Mr Gbagbo is unlikely unless his forces attacked the UN first.

Mr Ouattara has support in Abidjan but his real power base lies in the north and parts of the west. There will thus be a resurgent north-south polarisation in Ivory Coast until some kind of deal is reached.

The region and international community will have a major influence in what happens but ultimately, it will be behind-the-scenes discussions between the various military stakeholders and the politicians which will determine whether a deal - and what kind - can be reached.

What example for Africa?
The Ivory Coast crisis has repercussions for Africa and the global system.

Post-electoral disputes are nothing new in Africa but the fact that the two protagonists have formally established rival governments in the capital sets a complex and dangerous precedent.

Neighbouring Guinea has just emerged from a hotly contested run-off election; national elections are due in Nigeria in 2011.

The fragile and increasingly fractious power-sharing governments in Zimbabwe and Kenya are headed for elections in the next year or so.

There is thus enormous pressure on Ecowas and the wider community to ensure that Ivory Coast does not set a new template for post electoral meltdowns.

If the impasse continues, the implications are that elections don't matter and that defeated candidates who have military support can always use constitutionalism to subvert democracy.

Given that Africa has actually made enormous progress over the past two decades in strengthening the institutions of democracy and in holding elections, it would be a tragedy for the Ivorian people and for Africa generally if the world sees the Ivory Coast elections as yet another example of failed African governance.