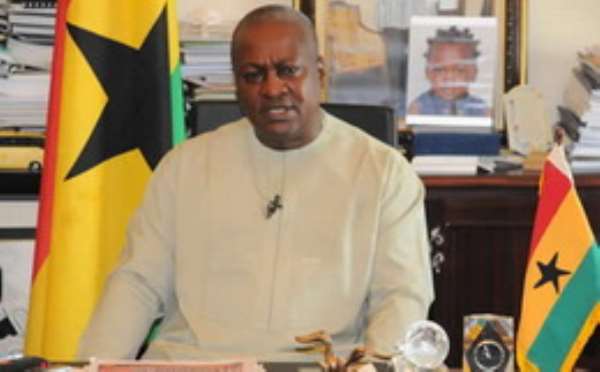 
The Vice President, John Dramani Mahama, has called on African leaders to simplify procedures that hinder the establishment of businesses.

They must also provide attractive incentives to would-be investors, to encourage them to do business in their countries.

The Vice-President made the call when addressing Gulf-Africa Investment Forum 2010 in Saudi Arabia.

He said it was in pursuit of the opening of its frontiers and to attract streams of investments that Ghana had over the years offered potential investors worldwide with unique range of attractions.

The two-day forum, on the theme "Fostering Economic Relations”, was to strengthen and deepen the trade and investment ties between African countries and member countries of the Gulf Co-operation Council (GCC).

He said the government had been marketing the country as an attractive investment destination, based on its comparative advantages and strengths, which included a stable political environment for over two decades, vigorous pursuit of sound economic policies and a conducive investment climate underpinned by an accommodating investment laws.

He said Ghana abounds in diverse minerals resources including gold, diamond, manganese, bauxite, and iron ore, among other things.

"We also have a wide range of fine tropical hardwoods. Ghana's climate and rainfall provide fertile soil for a wide variety of agricultural products, while fishing resources are abundant," he said.

Mr. Mahama said additionally, Ghana is a member of the ECOWAS and offered investors ready access to a regional market of some 300 million consumers, as well as to European markets.

Further, he stressed, Ghana had a highly trained and disciplined labour force with a low level of crime rate adding that "Ghanaians are renowned for their hospitality."

The Vice-President said currently Ghana is among the 10 largest producers of gold in the world, exporting some 80 tonnes a year.

He announced that, currently, a new gold refinery is under construction at the international airport in Accra to boost refined bullion experts.

Mr. Mahama mentioned the transport, health, tourism and the road sectors as among other areas for investment in the country.

He said Ghana had recently assumed the status of an oil production nation stressing that the production of oil in commercial quantities was expected to officially commence on December 15, this year.

“Oil production is another sector of Ghana's economy in which we could benefit from the long years of expertise of our friends in the Gulf region, as we seek to develop that area to finance our development," he said.

The Vice-President affirmed the government's full confidence in the private sector as an indispensable ally in the efforts to develop its economies and, therefore, called on the private oil firms in the Gulf region to consider investment in Ghana and the sub-region as a whole.

"I also call on the Chambers of Commerce and Industry of the West African countries and those in the Gulf to initiate trade and investment promotion missions between their organisations, to establish business contacts among their members, and give practical expression and momentum to the growth of trade and investment between West Africa and the Gulf countries," he said.

Mr. Mahama used the occasion to congratulate the State of Qatar on winning the right to host the 2022 World Cup and recalled the feat chalked up by the Ghana Black Stars in the last World Cup hosted by South Africa.

The President of Senegal, Mr. Abdul Wade, said the peace transition gone through by Ghana and Senegal should serve as a lesson of real democracy that could inspire a lot of African countries and the world at large.

The chairman of the Council of Saudi Chambers, Sheikh Saleh Kamil, expressed the hope that the forum would bear positive fruits in terms of exposing the Gulf Countries to the sub-region.