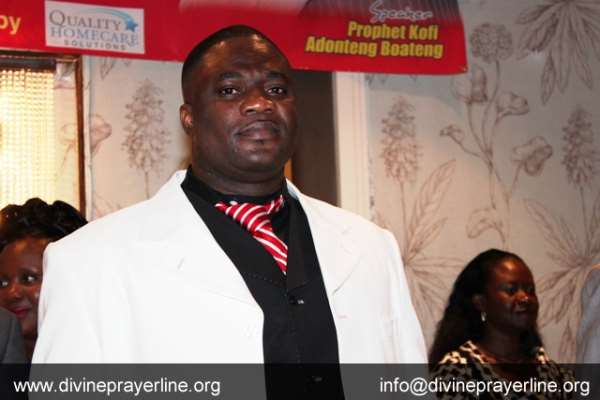 Life changing experience for over 7000 people from different faith.

This was a life changing experience for many Ghanaians in the Diaspora!

You may have seen or heard of conference prayer lines. Among these conference line comes one particular group called, THE DIVINE PRAYER LINE, lead by Prophet Kofi Adonteng Boateng. This sui generis Conference Prayer line is able to generate an attendance of up to over four thousand in a single session.

How does one organize thousands of Christians to pray on the phone twice daily for hours, and some calling from Africa, Asia and Europe? This is definitely a divine action for sure. The most intriguing part of the group is not only about the consistency in the numbers of participants, but the fact that they all come from different denominations and faith. It's so amazing how some confess to be Muslims, but join others in praying to Jesus Christ. What a phenomena! There have been miracles after miracles on this prayer line each morning and evening sessions. (10am-12pm) and (10pm-12am)

In October 2010, this prayer group organized their second Revival in Virginia. This three-day event changed destinies and lives. The crippled walked, destinies restored, and many received prophesy on their lives. Those who attended this Revival experienced the power and the anointing of God. There were so many testimonies and miracles after miracles at this Revival. Demons were driven out of many, and multitude rededicated their lives to Jesus Christ. The theme for this Revival was CROSSING OVER. Indeed, many did cross over in their lives. Moreover, all the attendees spoke to were very excited and were looking forward to the next convention.

These three days were filled with powerful praise and worship services drew over 7000 people. Grace Danso, Hannah Marfo, Yaw Asare , Brother Collins, Papa Shee and many more were all at hand to lead the worship.

There is Revival coming up in Ohio in November 12-14, New York in December 29-31, and Chicago and Canada is yet to schedule. Judging by fact that there's going to be another revival in the Eastern Seaboard of United States within such a short window after the first convention is ipso facto that the convention was indeed a success and blessing to many who attended.

I encouraging you to visit this prayer line at their website