Sufi lyrics from the soils of Bangladesh 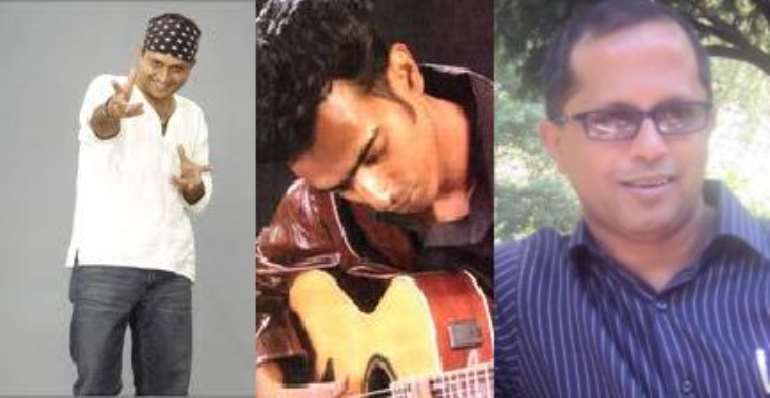 Lalon Fakir sang, “People ask if Lalon Fakir is a Hindu or a Muslim. Lalon says he himself doesn't know who he is.”

Lalon left no trace of his birth or his 'origin' and remained absolutely silent about his past, fearing that he would be cast into class or communal identities by a fragmented and hierarchical society. Despite this silence on his origins, communal appropriation of this great politico-philosophical figure has created a controversy regarding whether he is Muslim or a Hindu – a Sufi or a follower Bhakti tradition -- a Baul or a Fakir etc. He is none, as he always strove to go beyond all politics of identities.

On the other hand, Hason Raja, literary meaning - Hason the King, was a Bengali (now - Bangladesh) poet, mystic and folk songwriter. He gained international recognition years after his death, when Nobel Prize laureate, poet Rabindranath Tagore mentioned him in his lectures at Oxford University. Hason Raja hailed from the district of Sunamganj in Bangladesh.

Geographically though Lalon Fakir and Hason Raja hailed from two different corners of Bangladesh, they came under the same sky of philosophical thoughts of high spirituality and Sufism. Since demise of both the legends, a number of lyricists came up with their songs in Bangladesh, and only very few of them became known. One of them is Shah Abdul Karim, who also hails from the district of Sunamganj.

In today's Bangladesh, when the culture is under heavy aggression of Western tunes and West-prototype lyrics, mostly liked by younger generation, a very few of the lyricists are yet continuing to walk on the very slim rope of Sufi songs and are dedicating their time, zeal and energy in further enriching the already rich tradition of Sufi songs in Bangladesh. And here is one of most promising name in today's world of Sufi songs in Bangladesh, who also is continuing to create dozens of lyrics, mostly containing highest level of spirituality and divinity thus mixed with the very decent fragrance of humanity and love.

Shoaib Choudhury though a name yet not very much known in the arena of lyrics in Bangladesh but already internationally famous as a journalist, writer and peace activist, started writing songs since his childhood. His great grand father, Abdur Rouf Choudhury was one of the respected lyricists of Sufi and folk songs in the then Syhet district. The young Choudhury holds the same blood of rich tradition and heritage of mystic Sufism and folklore.

Since 2007, Shoaib Choudhury's Sufi songs started getting released with the first solo album of Polash Khan named 'Mohajon'. One of the best songs in that album titled 'Ae Dehey Boshot Korlam Rey' is available on various social sites including YouTube. But, Shoaib Choudhury thinks, best of the best in that album is 'Noya Ekta Jonom Amay, Daona Mohajon' song. Since release of this first solo album, a number of singers in Bangladesh sang Shoaib Choudhury's folk songs, including female singer Sumi Shobnom, whose solo album named 'Boshikoron Tabij' reached the top hit list in the audio market in Bangladesh. But, as a lyricist and tuner, Shoaib Choudhury was never fully satisfied with the performances of these rather young singers, till Bangladesh's most popular male singer S I Tutul sang his Choudhury's song – Dhora Dila Kotha Dila Apon Korlana.

This song has already enthralled the music lovers in Bangladesh as well a number of front ranking singers in the country. Singers like Andrew Kishore, Shakila Jafar, Fakir Shahabuddin or talented music directors like Showkat Ali Emon, Milton Khandokar or film directors like Uttam Akash, Shohanur Rahman Shohan and many others praised the extremely rich lyrics and the brilliant performance of singer S I Tutul after listening to this song. Even singer S I Tutul said on many occasions that, Dhora Dila Kotha Dila is one of the best songs in his entire career.

Commenting on Shoaib Choudhury's lyrics, folk singer Fakir Shahbuddin said, “He hails from the same land of Hason Raja and it is natural that Shoaib's lyrics will always contain the highest grade of Sufism as well the very mystic thoughts of the unseen divinity.”

Shahabuddin said, “Shoaib has not only shown his brilliance in writing Sufi and folk songs, he equally proves to be one of the best lyricists of modern songs in today's Bangladesh.

Azam Babu enjoys high repute for his excellent skill as the sound engineer in Bangladesh for decades. Hundreds of super hit songs in Bangladesh came through his hands. Commenting on Shoaib Choudhury's lyrics and tune, Azam Babu said, Dhora Dila Kotha Dila Apon Korlana is one of the very few excellent songs in the arena of Sufi songs. S I Tutul has been able to brilliantly sing this song with all his soul and zeal. Music lovers will definitely love this newly released song.

It may be mentioned here that, Dhora Dila Kotha Dila Apon Korlana is already on broadcast on various FM radio stations in Bangladesh. Shoaib Choudhury is also an enlisted lyricist with state-owned Bangladesh Television.

Celebrated film director Uttam Akash, commenting on lyrics and tune of Shoaib Choudhury said, “Starting to Sufi songs with extremely rich contents to film songs, he has been able to prove his excellence and zeal. Most importantly, Choudhury's songs are very much original and of his own style. He has written and tuned a song for my next movie named O MY DARLING. The song titled Jodi Bhalobasha Dao will surely become a super hit as soon as released. I think, his lyrics and tune will also cross the boundary of Bangladesh and will soon enter the cine world in West Bengal and Bollywood.”

He said, “Shoaib Choudhury also writes Urdu ghazals, which is very rare in most of the lyricists in today's Bangladesh”.

Shoaib Choudhury is currently working on solo albums of S I Tutul, Shakila Jafar, Fakir Shahabuddin and others. He also is working on projects of a number of mixed albums. It is learnt that, most talented Bangladeshi composers are working in these projects.

Commenting on his songs, Shoaib Choudhury said, “Tutul bhai is like a loving brother and mentor to me. Under his very dynamic guidance, I am working on few new songs, which possibly will be liked by the listeners.”

He said, “I have plans to have celebrated Bangladeshi composers like Martha Majumder, Bappa Majumber and others in composing my songs. Personally I am a huge fan of both Bappa da and Tutul bhai.”