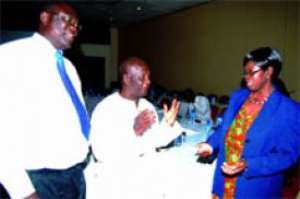 The Chairman of the National Commission for Civic Education (NCCE) has observed that the existence of witch camps in the country offends Chapter Five of the 1992 Constitution.

Mr Laary Bimi,considered the practice as discriminatory against women and inhuman and that it prevented the victims from enjoying their rights as humans as enshrined in the constitution.

He wondered why there were supposed to be wizards too but only women were made to endure the ordeal at the witches’ camps, where they are kept against their will.

Mr Bimi was speaking at a day’s workshop organised by the NCCE in Accra to disseminate findings of a study conducted by the Research Department of the Commission on: “Witchcraft and Human Rights of Women in Ghana: Case Study of Witches’ Villages in Northern Ghana”.

Witchcraft is considered a universal and historical phenomenon, which continues to attract a lot of interest. Suspected witches are regarded as evil and harmful and because of that, people suspected to possess such powers are sometimes killed, maltreated or banished from the communities in which they live.

Against that background, Mr Bimi challenged Ghanaians to abide by the tenets of the constitution in a holistic manner if they wanted to be counted among the democratic people of the world.

The study was conducted in three witches camps in the Northern Region, namely the Gambaga Camp in the East Mamprusi District, Tindanzie Camp in the Gushiegu District and the Tindang Camp in the Yendi District.

Presenting a paper on the “Objective, Methodology and Socio-demographic characteristics of Respondents”, Mrs Janet Sarney-Kumah said the 1992 Constitution established that citizens were entitled to certain rights and freedoms, which include equality before the law, freedom from torture, cruelty and inhuman treatment, and human dignity.

Mrs Sarney-Kuamh indicated that most of the alleged witches interviewed were very old people and said old age was a factor influencing an individual’s likelihood of being accused of witchcraft.

She, however, indicated that 7.1 per cent of the people interviewed openly admitted possessing witchcraft.

Mr Derek Gyamfi Yeboah, who presented a paper on “Witchcraft acquisition and conditions at the camps”, said 38 per cent of the respondents indicated that witchcraft was acquired through gifts obtained from persons who were already possessed.

In addition, 49 per cent stated that people acquired it through family lineage either by inheriting it from a dying relative or handed over to them by other family members.

Speaking on “Freedom of association, integration and conclusion”, Mrs Praise Mensah said since the constitution guaranteed freedom of association for every citizen, the alleged witches, irrespective of their conditions, had the right to participate in every lawful social activity of their choice in the community.

In her welcoming address, the Director of Research at the NCCE, Mrs Getrude Zakaria-Ali, commended the personnel for a good work done and said with the findings, the Commission was better equipped to embark on an effective civic education, which the constitution mandates it to do.