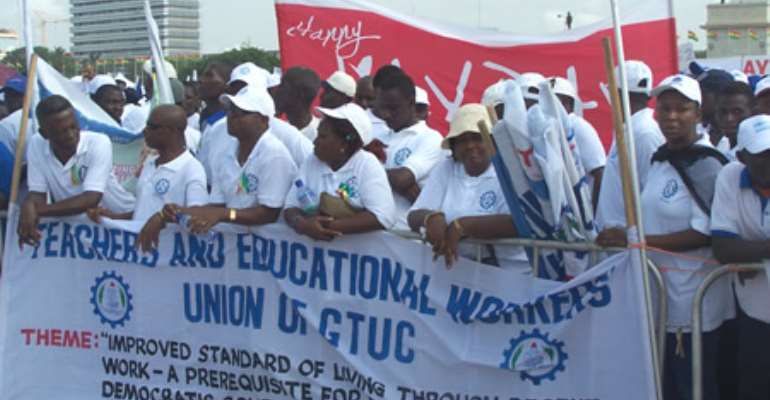 The Fair Wages and Salaries Commission (FWSC) and the Polytechnic Teachers Association of Ghana (POTAG), as well as Governing Councils of Polytechnics, met on Tuesday in Koforidua to explore avenues for resolving the sticky points concerning their placement on the Single Spine Salary Structure (SSSS).

Addressing the meeting, the Chief Executive of the FWSC, Mr George Smith-Graham, explained the rationale behind the Commission's decision not to negotiate with the Polytechnic Teachers Association of Ghana (POTAG) for their placement on the Single Spine Salary Structure (SSSS).

He explained that since there were other groups of workers such as the Teachers and Education Workers Union (TEWU) within the polytechnics to be negotiated with, the best solution to the problem was for FWSC to standardise the allowances and salaries within the public sector to correct all the anomalies.

That, Mr Smith-Graham said, would help members of POTAG to benefit from their placement on the SSSS.

The one-day meeting was to see how best to finally resolve issues that led to the strike of POTAG, which ended recently and also address inherent challenges facing polytechnics.

Mr Smith-Graham said although POTAG, whose collective agreement had elapsed since 2008, had a genuine case, should the FWSC single it out and negotiate with it for its placement on the SSSS, that would open a floodgate for others to follow suit and that would worsen the situation.

He, therefore, explained that the best option was for the FWSC to standardise allowances associated with 110 salary structures within the public sector, including that of polytechnic lecturers to ensure fairness.

Mr Smith-Graham said FWSC had done a lot in terms of SSSS implementation and that 15 institutions would be hooked on to it this month.

He appealed to POTAG to be patient to allow his outfit to do its job for the placement of its members on the structure, which he said would be beneficial to POTAG.

The President of POTAG, Mr Godfred Abledu, had earlier told the gathering that POTAG was not happy about the refusal of FWSC to meet the association and that it would be suicidal if its members were not involved in negotiations for their placement on the SSSS.

Mr Abledu, who gave an example of the disparities in the salaries of lecturers of the polytechnics and those in the public universities, indicated that such disparities must be addressed to bring harmony.

He therefore expressed the hope that the FWSC would act in that respect.

Earlier in his welcoming address, the Chairman of the Koforidua Polytechnic Council, Nana Nkwantabisa III, said although polytechnic teachers were back to the lecture halls, there were other challenges facing the polytechnics and called on stakeholders to help resolve them.