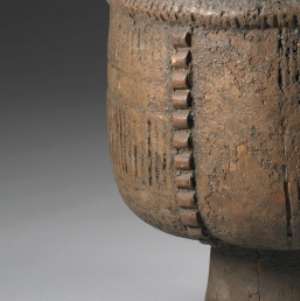 So it is true that human beings and human culture began in Africa, eh? Homo sapiens evolved in Africa at least 150,000 years ago. The fact was brought home to us again when the director of the British Museum (BM), Neil MacGregor, in collaboration with BBC, selected 100 items from the museum's vast collection to tell the history of the world in a hundred 15-minute programmes on Radio 4.

Human life started in Black Africa – specifically in present day Tanzania. When the narrator tells us that “we all have Africa in our DNA” one feels proud to be African. Two items at the beginning of the series (2 and 3) were from the East African Rift Valley: the Olduvai Stone Chopper and the Olduvai Handaxe. Both have the distinction of being the oldest objects in the BM. They are 1.8 million years old!

One has to wait until episode 86 for an item from our present country. This is the Akan drum (made in the 18th century), taken out of Africa and transferred to the US from where it found its way into the BM. The slaves were not allowed to take anything along on their journey so the drum must have been taken by slave traders or, perhaps, some African prince who, at times, accompanied these journeys as part of their education. This drum, according to the narrator, is “the earliest African-American object in the British Museum, ... possibly the earliest African-American object anywhere”. It was in the collection of Sir Hans Sloane, (an Irish doctor who was a slave owner in Jamaica) whose items formed the founding collection of the BM in 1759. It was collected in Virginia around 1730 and originally labelled as an American Indian drum. Seventy years later it was correctly established that the main body of the drum is carved from wood of the tree 'cordia africana', which grows in West Africa, while the pegs and the cords that hold the skin of the drum taut derive from wood and plants also from the same region. This is unquestionably a drum that was made in West Africa.

The Ghanaian scholar who commented on the drum was Anthony Appiah, professor of Philosophy at Princeton University, whom the narrator says has heritage from both sides of the European-African encounter (the son of Peggy and Joe). Appiah should know something about the drum but I thought, at first, that he was unduly trying to claim it for his Ashanti forebears. The narrator said the drum comes from the Akan people which include the Fantes. Can the drum be a Fante drum? Perhaps Appiah is correct. If the drum was also a ritual instrument used in wars, it was more likely to have originated from the forest dwelling and warrior-like Asantes than the coastal Fantes. But the drum, made from a hollowed out tree stump, could come from anywhere in Ghana or West Africa. Wasn't Kunta Kinte out in the bush searching for wood to make a drum when he was caught and sold into slavery? But the significance of the old drum as a historical artefact surpasses any concerns about its particular origin.

Present day Nigeria makes the list with two items. Episode 63 is about an Ife head carved in brass. Not much is known of this item except that it is a “great work of art” that “epitomises the great civilizations of West Africa of about 700 years ago”. The sculpture, one of several discovered in 1938 “exploded European notions of the history of art, and forced Europeans to rethink Africa's place in the cultural history of the world”, says the narrator. The Nigerian novelist, Ben Okri, links the tranquillity it exudes to greater existential questions when he says you cannot have that tranquillity “without having asked the great questions about your place in the universe”. The narrator said the sculptures of Ife clearly “came from an orderly world of technological sophistication, sacred power and courtly hierarchy – a world in every way comparable with the historic societies of Europe and Asia”.

The second Nigeria object is a Benin plaque (Episode 77) made between 1400 and 1600. It shows “figures in high relief that celebrate the battles won by the army of the Benin ruler, the oba, and the rituals of the oba's court”. This is the story of the Afro-European encounter from the Africans' side and it is interesting that the chief and his two court functionaries are shown larger than the two European traders. The narrator says the two whites even look “feeble and ridiculous”. Talk about representation of the other. The European traders depicted on the plaque might have discovered “in the fifteenth and sixteenth century ... a society every bit as organised and structured as the great courts of Europe, with an administration able to control all aspects of life”. In 1897, a British delegation entered Benin during an important religious ceremony. They were attacked and some members of the delegation were killed. The British sent a punitive expedition that ransacked Benin City, exiled the oba and created the British protectorate of Southern Nigeria. Many objects were looted and auctioned off to museums across the world to pay for the expedition. Readers of Asante history will remember a similar fate that befell the kingdom. Those who saw the artefacts in the then Europe were astounded by the astonishing quality of the art work from Africa. Wole Soyinka describes the African loss as contributing to “one's sense of the degradation that has overtaken many African societies, to the extent that we forget that we were once a functioning people before the negative incursion of foreign powers”. MacGreggor concludes by observing that the plaque is “a reminder that in the sixteenth century, Europe and Africa were able to deal with each other on equal terms”.

Even though the Nigerian items were not specifically from my country, I rejoiced at them. I felt like I did as a schoolboy in Ghana reading our history and exulting in the exploits of the gallant Ashanti warriors against the British and feeling sour at their eventual capitulation to the greater firepower of the invaders. What did it matter that these were not my direct forebears? This was the history of my nation. The Akan drum is my history too, and, together with the Nigerian artefacts, it is the history of black people everywhere. And the Tanzanian finds mark the history of humanity itself. What a sobering thought!

There are other Black African items too. Episode 22 (the Sphinx of Tarhaqo) and 94 (a Slit drum) both come from Sudan. Episode 60 describes Kilwa pot sherds (made between 1000 and 1400) found off the coast of Tanzania. Throne of Weapons (Episode 98) is a modern day artefact (2001) which is a chair made in Mozambique from guns to which Kofi Annan provides the “area expert” comments. The series ends with two modern day artefacts – a credit card and a solar powered lamp (99 and 100). What will viewers to BM think of these in a hundred years' time?

All the 100 chosen items are very interesting. Episode 91, for instance, describes the earliest chronometer (British) and the process by which the world came to accept GMT as marking the zero hour of the day. The French resisted for a long time but reluctantly fell in line with the rest of the world. The same thing is happening today with measurements as the British and the Americans hold out on imperial measures. The British are under strong pressure from the European Commission to change and, one day, even America too will trot behind the rest of the world and sell gas in litres rather than gallons.

In Episode 92 we learn of a time in Britain when women were discouraged from taking coffee because it was thought to be too strong for them. Tea was recommended for them. The temperance movements of the day encouraged the drinking of tea as a replacement for alcohol and the British became tea drinkers. It is interesting that after more than one hundred years of colonisation, the British didn't leave their “insatiable taste for tea” with us in Ghana. How many Ghanaians drink tea the way the British do? Give me one huge cup of Milo with bread, margarine and fried eggs in the morning and I will have no problems with the world. But somehow, “tea” became the traditional generic name for all beverages in Ghana.

I felt the BM director glossed too lightly over the controversy raging today over the return of artefacts in foreign museums to their original habitats. He mentioned it briefly in connection with the Elgin Marbles that Athens so desperately wants back. Black Africa also has many items in the west it wants back. The Golden Stool was not taken but I am sure there are many highly crafted Ashanti artefacts in the BM's possession that are stolen items. Things are changing, though. The Metropolitan Museum of Art in New York recently announced it was returning 19 items found in Tutankhamun's tomb to Egypt from where they were stolen and illegally exported when the boy pharaoh's tomb was discovered in 1922. The countries that now posses these stolen artefacts of history argue that these items belong to humanity as a whole and not only to the particular cultures that produced them and they, anyway, have better facilities to preserve them than the countries of their origins. But this argument is becoming weaker by the day.

N.B. The episodes are available for download as podcasts from BBC's website (http://www.bbc.co.uk/podcasts/series/ahow). The site also contains transcripts of the broadcasts (from which my quotes were taken) and pictures of all the items. Listening to all 100 episodes will take you almost 24 hours but one can choose individual episodes. The series is now also available as a 700-page book published by Penguin Books Ltd.