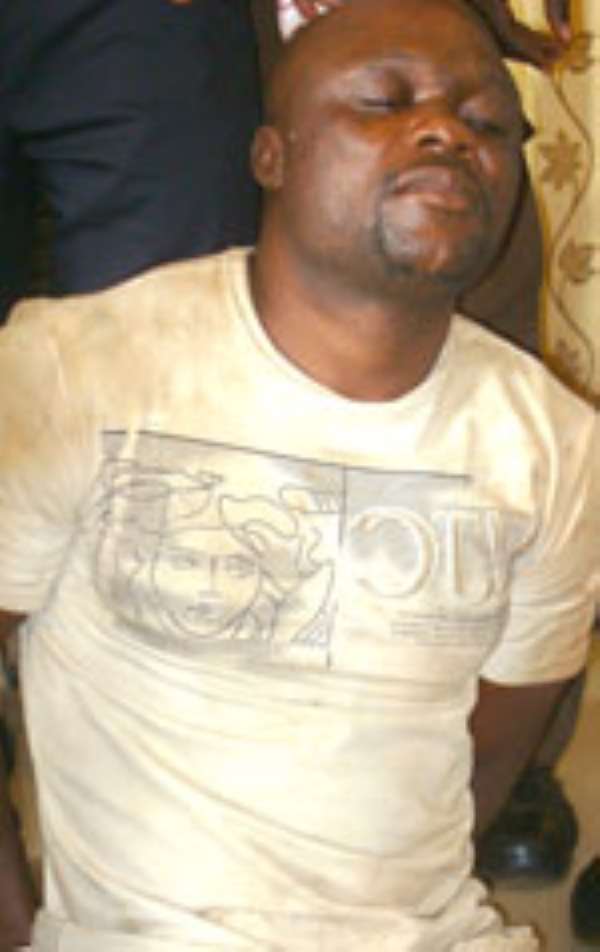 The police in neighbouring Togo have brought immense relief to the Ghana Police Service and Ghanaians, especially, those in Nakpanduri, a troubled community in the Bunkpurugu-Yunyoo District of the Northern Region, after arresting Ghana's most notorious criminal in recent times, Johnson Kombian, a.k.a. Burger.

This is the second time the Togo police have assisted in arresting Kombian, but it is not known whether their Ghanaian counterparts can this time handle the notorious criminal, who has broken jail several times.

The Chronicle gathered that Johnson Kombian, who recently killed two police officers and injured one other at Nakpanduri, was in Northern Togo last Friday November 19, 2010, to visit one of his girlfriends, and was arrested following an SOS appeal to Interpol from the Ghanaian Police.

The killing of the two police officers, angered National Security operatives, especially, the Interior Minister, Martin Amidu, who deployed over 100 fully-armed personnel to search for Kombian and his accomplices, but the operation eventually became 'a raid,' as the police personnel allegedly destroyed several houses.

Since the time of the incident, the notorious criminal, according to the youth of Nakpanduri, had been moving freely in the town with arms and other weapons around him, which put fear and panic in the police and the local people.

For fear of losing their lives, the police personnel in town ran away from Nakpanduri, leading to the closure of the police station.

The Northern Regional Police Public Relations Officer (PRO), Chief Inspector Ebenezer Tetteh, in a telephone interview with The Chronicle, confirmed the arrest of Johnson Kombian by the Togolese police on Friday, a day one of the three police officers he allegedly shot was being buried.

The Police Public Relations Officer told The Chronicle that the arrest of Kombian was a big relief to the police and the Ghanaian public, especially, those in the Nakpanduri, Bimbilla and Bunkpurugu area.

The Regional Police PRO said Kombian would be transferred to Accra by the Togo police anytime soon for his trial to begin.

Chief Inspector Tetteh assured the public that this time round, Johnson Kombian would be put in the safest prison, where he cannot even attempt to escape.

Johnson Kombian is a native of Nakpanduri in the Bunkpurugu-Yunyoo District in the Northern Region.

He has several criminal records, including robbery, rape and murder. Kombian, who is now first on the police wanted list, broke out of jail for the third time at the Tamale Central Prison, after he was arrested by the then Northern Regional Police Commander, ACP Angwubutoge Awuni, together with three members of his gang in November 2009.

He was alleged to have killed two armed soldiers and robbed them of their weapons at Nakpanduri in 2005. Kombian also broke into the Police Armoury at Nakpanduri in the same year, and made away with police uniforms and AK47 assault rifles.

The 34 year old notorious robber is on the police wanted list for engaging in several highway robberies, in which he is alleged to have killed, maimed, humiliated and raped women victims.

Some of the youth from Nakpanduri have also accused Kombian of recruiting and training a number of young men from the area, who were said to be as dangerous as Kombian.

The manner of the notorious jail-breaker's last escape from the Tamale Central Prisons has made many residents believe that he enjoyed some support from some superior security personnel.