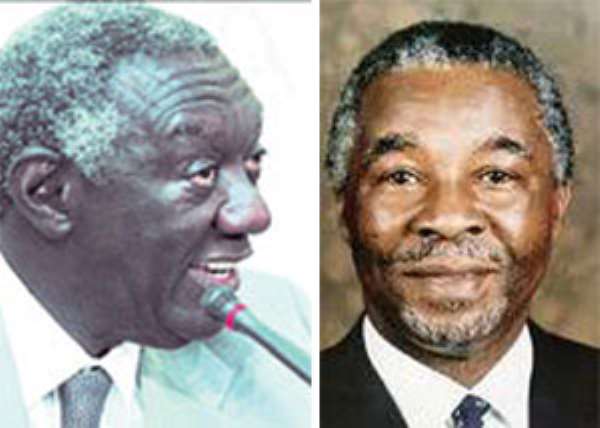 Ahead of Obama, Larry Summers, Obama's economic policy point-man, in New Delhi, India, touted China's and India's development successes, grappling with whether China's Beijing Consensus or India's Mumbai Consensus was better for the rest of the developing world. With Brazil's success over the years that has seen millions of Brazilians moved out of poverty, and built an economy in which the middle class is the majority, we can safely say there is the Sao Paulo Consensus in South America. That makes the African region the only place without a notable developmental Consensus distilled from within itself.

Washington Consensus
Such issues have cropped up, because the dominant Washington Consensus has been dictating development doctrines for the developing world since 1989, especially, Africa, which is disadvantaged in the international political economy, and which has had crises-wrecked economic development.

Honestly, all the above prescriptions have everything to do with discipline. For some time, such prescriptions were virtually imposed without considering each country's situation. Africa has suffered dearly, because of such uninformed thinking.

Sadly, Summers didn't mention an African Consensus, because there is none. But his message is clear to Africa, since Africa is part of the international development system.

If there are Beijing Consensus and Mumbai Consensus, where is the African Consensus? As Michael Schuman (of the USA-based Time magazine) explains, while 'some believe that China's state-heavy, semi-market economy — or 'state capitalism'' is the ideal model for developing countries, Summers thinks instead, 'a Mumbai Consensus, based on the idea of a democratic developmental state, driven, not by a mercantilist emphasis on exports, but a people-centered emphasis on growing levels of consumptions, and a widening middle class.'

Generally, in the Beijing and Mumbai models, what is important is their ability to tinker with the Washington Consensus to their innate traditional values and histories, and, in the process, have 'boasted an incredible record of alleviating poverty, building industry, creating jobs, and translating economic power into political power.'

In wrestling with either the Washington Consensus or the Beijing Consensus, Summers opts for the Mumbai Consensus - 'a third way, not based on ideas of laissez-faire capitalism that have proven obsolete, or ideas of authoritarian capitalism that ultimately, will prove not to be enduringly successful.'

The lesson here is that both China and India have not abandoned the principles of the Washington Consensus, but have appropriated them into their innate traditional values, and mixed both ideals reasonably well for their progress. China's traditional Confucianism mixed with dose of communism and capitalism, for example.

The fact is Africa had had a peek into both the Chinese and the Indian models, but didn't work them out appropriately from within its traditional values upward for sustainability and progress. Ask Mathieu Kerekou (Benin Republic) and Menghistu Haile Mariam (Ethiopia) about this.

At issue is development thinking that emanates from the core ideals of African traditional values and rational realities. The product of this mixture can aptly be called, both philosophically and practically, the African Consensus.

Waiting to be mixed and appropriated, all the ingredients for an eventual African Consensus are there to be used - the problem is lack of spiritual and political will. From Kwame Nkrumah to Thabo Mbeki, the talks have been superb, but the actions are empty.

The cultures are there to be collated as symbols for continental unifier and the spiritual lubricant to drive progress; from ECOWAS to SADC, the regional organisations are there for the construction of the African Consensus; the over one billion African people are there for a solidly huge internal market; and aside from the African Development Bank, other institutions are increasingly being developed that can launch the Africa Consensus.

poor leadership
Either as if being held by some unseen forces, or more correctly, poor leadership, ex-Ghanaian President John Kufuor has bemoaned African leaders' unwillingness to integrate their economies.

Kufour's concerns reflect the fact that 50 years ago, African founding fathers such as Kwame Nkrumah, passionately promoted Pan-Africanism, among its striking attributes, as a means of uniting Africa politically and economically. But African leaders are yet to appropriate it gamely for greater progress.

Yes, regional blocks such as the ECOWAS are on the ascendency, but the direction towards a continental African Consensus such as China's or India's cannot be seen on the African development radar.

How can an African Consensus happen when the majority of Africans in the traditional, informal sector, where most of the wealth are located and entrapped, as the rapid expansion of the mobile phone phenomena across the continent shows, aren't factored in when policies are being created?

The ability of African leaders to midwife an African Consensus will be a response to Summers' views, and an answer to Michael Schuman wearily asking, 'India vs. China: Which is the best role model for the developing world?' While India or China may be of admirable development footnote to Africa, of advancement lesson is the fact that their successes are partly driven by their core traditional values that drives their mentality, discipline, and work ethics.

Yes, as Schuman indicated, 'every up-and-coming poor nation wants to 'be like China;' why not, for the good life, isn't it? But how Africa will be like China or India involves clear substantial thinking from within African traditional values by Africa's leaders.

While China may have its own unique history, India's has a bit of Africa's - European colonialism. As a development venture, African states were founded on ex-colonial Western development paradigms that didn't adequately factor in African cultural values.

The Beijing and Mumbai Consensus, because their leaders were able to move beyond the dominant Western paradigms, by re-orientating their development ideals, and manufactured from within their cultural tenets, and driven by responsible leadership.

From Southeast Asian to Europe, nations that have prospered, and sustained it, have done so from within their core cultural values, and play them with other worldly prosperity ideals.

Consequently, this question from Schuman will be appropriate to African leaders, elites, and the mass media: 'So what is a better model for' Africa's progress? '… The Mumbai Consensus, or the Beijing Consensus?' The best model for Africa isn't either, but the one from within Africa. But occasionally, Africans could draw lessons from the Chinese and the Indian models. It is such new thinking that will help grow the real African Consensus, and open the way to the renewal of Africa's progress.