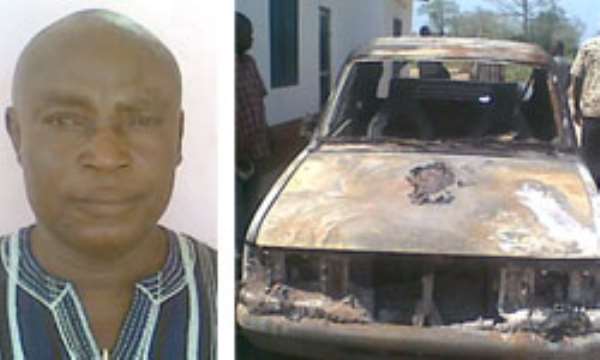 Nene Tetteh Mineh Animle II, Chief of Tokpo in the Osudoku traditional area in the Greater Accra Region, escaped death by God's intervention, when armed men stormed his palace on the night of Sunday November 7, and started shooting indiscriminately.

The attackers did not only fire shots into the palace, but also set ablaze some properties, including a single cabin Toyota pick-up, 250cc Yamaha motorbike, 7500HP generator, foam mattress, plastic chairs, electronic gadgets and furniture among others, running into several thousands of Ghana cedis, but thankfully there were no casualties.

The house of the chief's linguist was also not spared, as everything, including the roofing, beds, furniture, and household items among others, were burnt.

Briefing a section of the media at his palace last Saturday, Nene Mineh Animle II said for some time now, his brothers, especially, Malafao Animle, Godwin Animle and Ben Animle, had been asking him to claim the properties of their late father from the family, so that they could have access to them and enrich themselves, but he refused.

He explained that the properties belonged to the entire Animle family, and therefore, he did not see the need to connive with his blood brothers to deprive other family members of it.

This, Nene Mineh Animle II believed, had become the bone of contention between he and his brothers over the years.

The Tokpo Chief noted that earlier, on the day in question, he was at home when his younger brother, one Richard Animle, came to inform him that Ben Animle had attacked one David Teye McCarthy, and stopped him from doing his work, and had destroyed some of the equipment he was using.

He therefore, asked Richard to go and call Ben to come and see him, but someone came from the site to inform him that three of his brothers had attacked Richard, who managed to defend himself.

The three later reported the matter to the police, and were issued with medical reports to attend hospital, after which investigations into the matter would be carried out.

The Tokpo Chief continued that the same day, around 6:30 p.m., he had an anonymous call informing him that he should leave the palace and seek refuge somewhere, because his three brothers had organised some thugs to come after him.

He hinted that even before he could leave, he heard the chanting of war songs from afar, by a group of people he did not know.

'I saw my three brothers, Malafao, Godwin and Ben, with a huge mob, including Malafao's two sons, around my palace. Ben was then holding a gun, and he started firing towards my direction, and I quickly switched off the lights in my palace, and in the black-out they stopped firing as they were no longer able to determine my location.

'I then managed to sneak into my car, and just as I entered, they realised it, and started shooting at me again, until I escaped,' Nene Mineh Animle II disclosed.

He mentioned that when all of these were going on, some nurses from the Ghana Health Service (GHS), who were manning the only health post in the village, and who were putting up in his palace were also caught in the crossfire.

The Topko Chief further said that he had reported the matter to the police, which had commenced investigations into the matter, but the suspects were presently at large.

One of the nurses (name withheld), who spoke to the paper, said when the attackers stormed the palace, they became confused, and did not know what to do, and so started running helter skelter, especially, when they set the motorbike ablaze right behind the windows of the only midwife at the health-post.

When the paper arrived at the palace, police personnel had been detailed to maintain law and order at the palace until calm returned.

A police source confirmed the case, but refused to comment further, saying he was not mandated to speak on the matter.