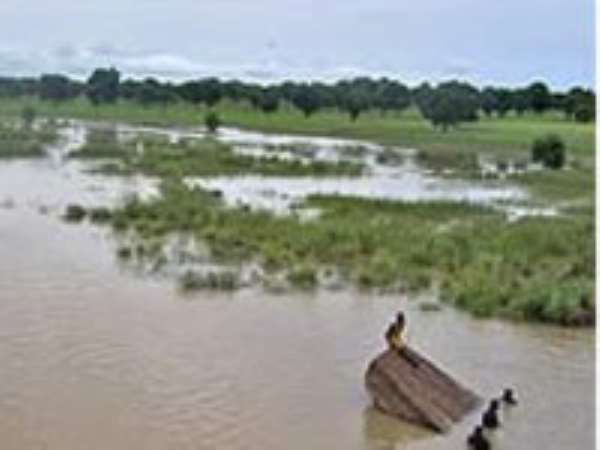 
The World Health Organization (WHO) has donated medical supplies worth over GH¢3,500.00 to the Central Gonja District to assist it attend to the medical needs of the people following the recent devastating floods.

Other members of the WHO team were Mr Stanley Diamenu and Edward Gyepi-Garbrah, Country Advisor for Routine Immunization and Advisor Guinea Worm Eradication respectively.

Mr Be-Awuribe, Central Gonja District Chief Executive commended WHO and UNICEF for their prompt attention and assistance to the district.

He said the floods had affected 55 communities with 25 of them completely submerged while 30,000 people had been displaced with two people dead.

Mr Be-Awuribe added that some public toilets had also submerged while over 1,119 livestock had been carried away by the floods with 65 schools and 15 boreholes seriously affected.

He said although there had been fears of the outbreak of an epidemic the situation had been brought under control because arrangements had been made to supply the people with clean drinking water.

Madam Amadu Daison, District Director of Health at Buipe, said so far there had not been any serious outbreak of any water borne disease and that the district health centre was managing and treating the people who had reported with ailments.

She appealed to the WHO and other organizations to assist the health personnel in the district with boats to enable them to reach the inaccessible areas to attend to the health needs of the people.

Dr Fleischer-Djoleto said the support from WHO was to alleviate the plight of the people and also prevent the outbreak of an epidemic.

He said the organization would continue to monitor the situation and mount surveillance on the outbreak of diseases so that it could quickly respond during emergency.