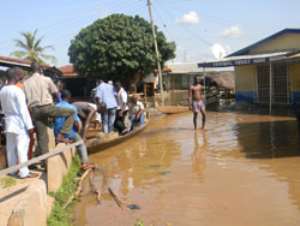 The Chief Executive Officer (CEO) of Action Aid International, Madam Joana Kerr, has called for the immediate abolition of witches camps and witchcraft accusations against women and young girls, which is considered an acceptable cultural practice by the people of the Northern Region of Ghana.

According to her, the practice was not only outmoded and dehumanising, but also offered opportunities to vindictive persons in the affected societies to torture, harass, humiliate, and violate the fundamental human rights of the suspected witches.

Addressing the inmates of the Gnani Witches Camp in the Yendi Municipality of the Northern Region, as part of her working visit to Ghana, Madam Kerr advised people living in the affected communities to stop the false accusations against the women, and rather focus on creating opportunities that would improve their general wellbeing.

The Gnani Witches Camp alone has over 945 inmates, including an estimated 630 children of school-going age, who followed their mothers to the camp, after they had been banished from their communities.

Regrettably, all the 630 children at the Gnani witches camp are currently not in school, as a result of their parents' inability to cater for their education.

Their mothers, suspected to be witches, have found Gnani a home, where they have been living for many years ever since they were banished and ostracised by their husbands, families, and community members.

Ahmed Mahamud, 28, who has lived all his life at the witches' camp, told this reporter, who accompanied the Chief Executive Officer of Action Aid International on a tour of the area, that he was an illiterate because the Tingdang community lacked schools.

Some of the alleged witches, including Madam Martha Neindow, shared their sad stories with the team, and concluded that they found themselves at the camp because of false accusations leveled against them by their own people.

The alleged witches commended Action Aid-Ghana, and its development partners like Songtaba, for alleviating their plight in diverse ways, and appealed for educational infrastructure and skills training to enable them make some money, and send their children to school.

Madam Kerr therefore, called on the media to shift public opinion from the perceptions of witchcraft, by helping to build a society that would be free of such injustices.

Later, at a meeting, prior to a dinner organised in her honour by Mr. Moses Bukari Mabengba, Northern Regional Minister, Madam Joana Kerr requested that the Northern Regional Coordinating Council (RCC) focus its partnership drive with Action-Aid Ghana on four thematic areas.

She mentioned the areas as abolishing the culture of witchcraft against women and children, championing the education for all concept, increasing to 40% women participation at all stages of decision making processes, especially, at the grassroots level, as well as granting women access to land.

Meanwhile, Mr. Moses Bukari Mabengba commended Action-Aid Ghana for its socio-economic interventions in the Northern Region over the last 20 years, and pledged the RCC's support to make the organisation achieve its aims and objectives.