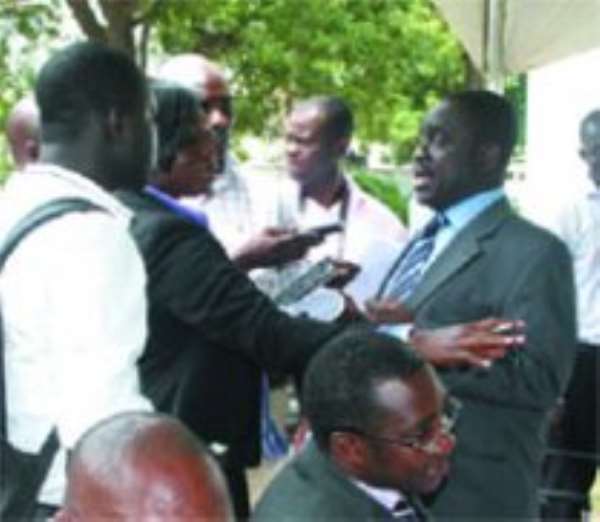 The Lands Commission has taken steps to halt the improper acquisition of state lands by private individuals with the cancellation of seven allocations at Roman Ridge in Accra and the withdrawal of 77 others elsewhere.

The Commission is also demanding “top-up” to what it describes as “paltry sums” paid by some of the beneficiaries for the allocation of state plots.

The Chairman of the Land Commission, Nana Adjei Ampofo, told journalists at a news conference in Accra yesterday that there had been “a lot of injustice in that while beneficiaries of plots in the re-development schemes paid open market values, those of in-filling plots paid paltry sums as premiums sometimes for plots adjacent to those in the re-development schemes”.

He said the beneficiaries of the in-filling plots would be required to pay the difference between the value they paid and the price of plots paid by beneficiaries under the re-development schemes.

The media encounter was to clarify some pertinent issues relating to the commission’s management of some state lands in the country, which has attracted banner headlines in recent times.

The media encounter was attended by members and officials of the commission.

He said although the allocations might be indiscretionary, they could not be considered as criminal.

Mr Ampofo said the commission, after its inauguration in August, 2009, decided to review the management of lands and some schemes, namely allocation of plots through conventional site and service schemes, in-filling schemes, redevelopment schemes, allocation of lands at the International Students Hostel site, Accra-Tema Motorway corridor and Kumasi Part 1 lands.

The allocation of plots through conventional site and service schemes involves the preparation of a planning scheme for a bare land, usually acquired for residential, industrial or commercial development such as some residential areas in Accra, including the Airport, Roman Ridge, Cantonments and Labone.

Mr Ampofo said the practice over the years had been that plots under that scheme were allocated by the Lands Commission at a price below the market value with the aim of offering public servants access to land at reasonable prices for their private housing development.

The in-filling schemes involve the carving out of under-developed portions of government bungalow sites for development either by the state or private entities with the aim of increasing the density of development and maximising the utilisation of available land and infrastructure.

He said in-filling schemes were carried out extensively in the 1970s but they were stopped under the State Lands Re-vesting Decree of 1977 (SMCD 227).

He said between 1998 and 2008, in-filling schemes was undertaken, much extensively during the period 2004 -2008, in the Cantonments, Switchback Road, Ridge, Airport and Roman Ridge residential areas, all in Accra, and near the Residency in Kumasi.

Mr Ampofo, however, observed that although in-filling schemes were usually done in built-up areas, the allocation of plots rather followed the practice used for allocation under the site and service schemes, adding that the plots were allocated at below-market prices with premiums paid ranging from GH¢6,000 to GH¢8,000 per plot in Accra, and GH¢800 to GH¢4,000 per plot in Kumasi.

He said the Commission would respect the decision by its predecessors to reduce the reservation of the motorway corridor from 400ft on both sides to 150ft, considering the fact that many beneficiaries had developed their plots based on the new reservation.

On the return of lands to pre-allocation owners, Mr Ampofo said the Commission had decided to return one-third of the plots to be withdrawn to the pre-acquisition owners.

He said so far, 12 of the plots withdrawn in the Cantonments area had been shown to the leadership of the Ga-Dangme Council in line with that objective.

Mr Ampofo said the Commission, acting on the instruction of the Ministry of Lands and Natural Resources, had returned to the Nungua Stool 60 per cent of land covering 974.53 acres acquired in 1940 at Nungua for the Nungua Farms project.