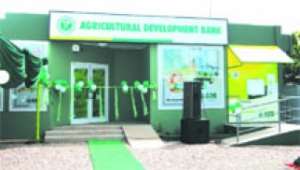 The Agricultural Development Bank (ADB) has expanded its operations in the northern sector as part of efforts to enhance people’s access to credit for agriculture and small-scale businesses.

The bank has increased its branches in the three northern regions from six to 10 after it inaugurated four more branches in Navrongo in the Upper East Region and Yendi, Savelugu and Walewale in the Northern Region.

This is in line with the bank’s three-year strategic plan, which was designed to place it among the top three performing banks in the country by 2012 by increasing its presence in all parts of the country and serving its customers a dish of enhanced banking products, with increased focus on agricultural financing.

Opening the Yendi branch, the Deputy Minister for Agriculture in charge of Fisheries, Nii Amassah Namoale, commended the ADB for endeavouring to bring its services to the doorstep of the people in the northern sector.

He, however, urged the bank and other commercial banks to consider reducing their interest rates to enable more people, particularly farmers and small-scale business operators, to access credit.

The deputy minister also reiterated the need for loan beneficiaries to repay their loans in time, warning that failure to do so would be an attempt to “kill the goose that lays the golden egg”.

“If you repay your loans, it encourages the bank to provide you with more credit and this enables you to expand your businesses and make more profits, whiles the bank also grows,” he noted.

The Managing Director of the ADB, Mr Stephen Kpordzih, explained that the expansion of ADB’s operations in the north was particularly of immense significance to the development of agriculture in the north due to the bank’s commitment towards agricultural financing.

“The three regions offer a huge potential for increased production of food, industrial and export crops, poultry and livestock,” he stated, adding that “expanding our reach in these areas, therefore, means a greater boost for agribusiness in areas like transportation, storage, preservation, warehousing, input distribution, marketing, among others.”

Mr Kpordzih again noted that increasing the number and distribution of ADB’s business locations in northern Ghana would enable the inhabitants to access the services of the bank with greater comfort and convenience.

He said customers would also have the opportunity to benefit from the bank’s enhanced bouquet of banking products, which included four new products that were launched during the branch opening — ePayday Plus, Mmofra Account, Pension Plus and Student Save Account, which are all specialised accounts for various categories of customers.

The MD further mentioned that customers in the northern sector would also benefit from ADB’s enhanced electronic banking services, such as the Quickcash ATM service and the recently added QuickAlert and QuickMail services that enable customers to transact business via mobile phones and emails.

The board chairman of ADB, Alhaji Ibrahim Adam, in his address, said the opening of the new branches in the northern regions underlined the new direction aimed at repositioning ADB appropriately within the economy.

He said ADB was repositioning itself to play an enhanced role in the growth strategy of the Savannah Accelerated Development Authority (SADA), which was poised to open up northern Ghana for investment in various sectors.

Alhaji Adam said the challenge of ADB was to be among the top three performing banks in the country by 2012 and appealed to the communities surrounding the new branches to patronise the services of the bank.

The Deputy Northern Regional Minister, Mr San Nasamu Asabigi, entreated the residents to save with the ADB and also exploit its loan offerings to enhance their businesses.