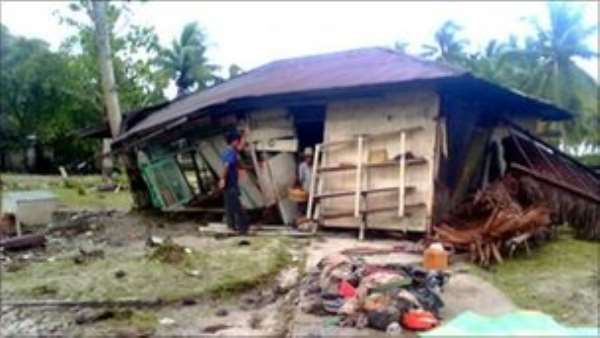 
Hopes are fading for more than 300 people still registered missing after Monday's tsunami in Indonesia, as the death toll climbs to 394.

Disaster official Ade Edward says the 3m (10ft) surge is likely to have carried many of the missing out to sea, or buried them in the sand.

The government has pledged millions of dollars for the relief effort, but relief workers say more is needed.

Indonesia is also struggling with the devastation caused by this week's eruption of Mount Merapi in central Java, which killed more than 30 people.

As the scale of the tsunami disaster became clear on Thursday, Mr Edward painted a bleak picture of the chances of finding more survivors.

"Of those missing people we think two-thirds of them are probably dead, either swept out to sea or buried in the sand," he told the AFP news agency.

"When we flew over the area yesterday we saw many bodies. Heads and legs were sticking out of the sand, some of them were in the trees."

He estimated that a further 200 people may have been killed.

Indonesia's state-run news agency Antara reported that 468 houses had been completely destroyed by the wave.

Village chief Tasmin Saogo told the BBC's Indonesian service that the islanders had begun to bury their dead.

"In the village of Sadegugung, there aren't any body bags. In the end we just lifted them and we buried 95 people today," he said.

"There are still may bodies lying about, underneath coconut trees and in other places."

Meanwhile, the party of President Susilo Bambang Yudhoyono has been trying to defuse a growing political row over comments made by one of its senior members

In comments translated on the Jakarta Globe website, House of Representatives Speaker Marzuki Ali suggested relocating people living next the sea, adding: "Anyone who is afraid of waves shouldn't live near seashore."

Rival politicians criticised his statement as insensitive, and the party has apologised.

Earlier, Mr Yudhoyono cut short a trip to Vietnam to oversee the rescue effort, flying in a helicopter loaded with food and other basic necessities to the remote and inaccessible islands.

Indonesian officials said locals had been given no indication of the coming wave, as a high-tech tsunami warning system installed in the wake of 2004's giant Indian Ocean tsunami was not working.

The vast Indonesian archipelago sits on the Pacific Ring of Fire, one of the world's most active areas for earthquakes and volcanoes.

More than 1,000 people were killed by an earthquake off Sumatra in September 2009.

In December 2004, a 9.1-magnitude quake off the coast of Aceh triggered a tsunami in the Indian Ocean that killed a quarter of a million people in 13 countries including Indonesia, Sri Lanka, India and Thailand.