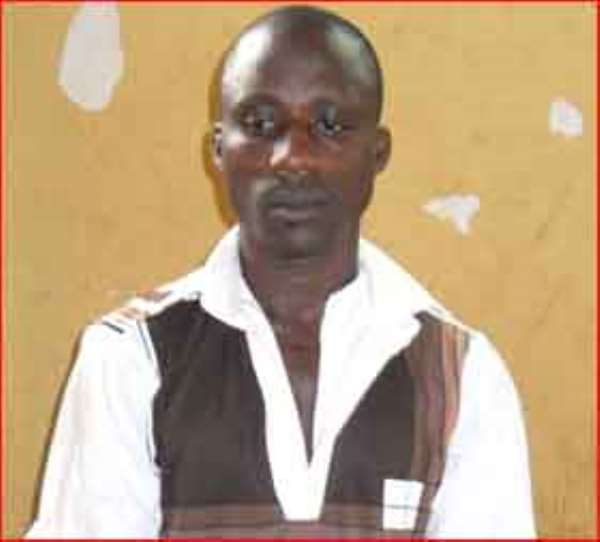 The tension that engulfed the Bekwai municipality in the Ashanti region has dissipated following the arrest of Douglas Antwi, a 27-year-old trader, who allegedly murdered a teacher of Bekwai SDA Junior High School (JHS).

Lawrence Badu was reportedly beaten to death by the suspect and his friend, while walking with Antwi's former girlfriend, Francisca Nyarko, to Badu's grandmother's house at Bekwai for soup.

The incident caused fear and panic as some residents fled their homes for fear of being arrested.

Douglas, a native of Kensere near Bekwai, allegedly committed the offence five months after he was jilted by Francisca, 17, who later hooked up with the deceased to the frustration and anguish of the suspect.

He was arrested on board a 207-Benz bus bound for Kumasi from Tarkwa at a police barrier in Obuasi, after he went into hiding in Togo soon after the incident on the night of November 6, 2009.

Confirming the arrest and detention of Douglas, Detective Sergeant Stephen Ofori said the victim was initially hit with a club on the neck from behind by the suspect and another person, who were stalking him and Francisca around 7pm on the day of the incident.

According to the police officer, the assailants subsequently pounced on Lawrence Badu and his girlfriend, beating the man to death and rendering Francisca unconscious.

The suspect went into hiding and never returned until he was spotted in Tarkwa on Tuesday, October 19, 2010.

He was arrested at a police barrier in Obuasi upon a tip off.

The lady then travelled back to New Edubiase, her hometown, during which time the suspect persistently pestered her with reconciliation, but she declined.

On seeing the deceased and Francisca on the night of November 6, 2009, the suspect became jealous and trailed the new lovebirds.

He and his friend then attacked the two with clubs at a section of the main road of Bekwai, about 30 metres away from the SDA Senior High School (SHS) junction, before beating Badu to death.

Frightened by the incident, Francisca escaped to her hometown without reporting the matter to the police. But when she was arrested later, she recounted the episode to the police.

The suspected has since been remanded into prison custody by a Magistrate Court in Bekwai.

He would return to court on November 3, 2010.
From Ernest Kofi Adu, Bekwai