THE EX-SPORTS MINISTER, MUNTAKA WASTED OUR MONEY, TRAVELLING TO GERMANY WITH HIS GIRL FRIEND TO NEGOTIATE FOR SPORTS EQUIPMENT INSTEAD OF NEGOTIATING PER E-MAILS AND INTERNET 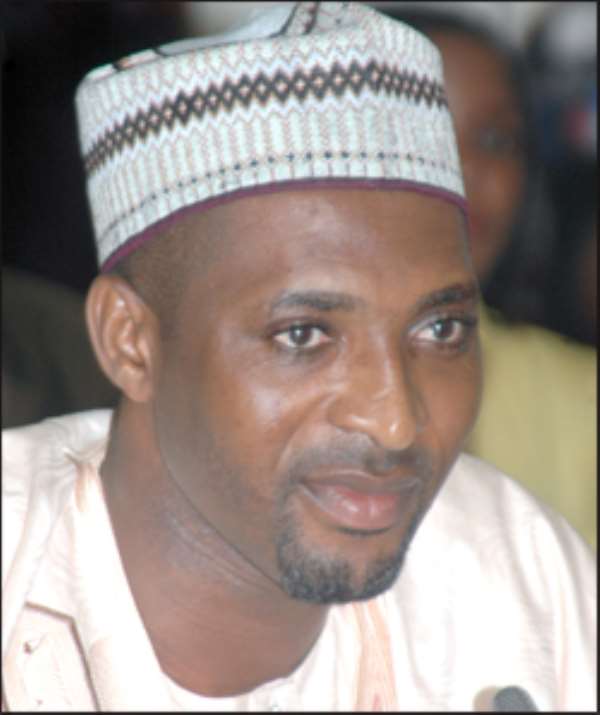 Why did the Ex-Sports Minister, Muntaka fly to Germany with 3 other people only to negotiate for Sports equipment instead of negotiating and placing his orders through E-Mails and Internet?

The 3 other people included Edith Zinayela, Charles Aryeh, (who was Director of Sports Council) and Kofi Kukubor, who arranged for the meeting with officials of the sporting kit manufacturers, Puma.

The Ex-Sports Minister, Muntaka instead of negotiating per E-Mails and Internet to order the Sport kits from PUMA in Germany, he rather wrote a letter to the Chief Protocol officer of the Protocol Bureau of the Ministry of Foreign Affairs, requesting it to facilitate the acquisition of German visas for him and 3 other people which is now a subject of controversy at a sitting of the Commission on Human Rights and Administrative Justice (CHRAJ).

The whole controversial episode started when the Administrator and Deputy Director Deputy Progressive Nationalist Forum Director of Human Resource at the Sports Ministry, Allen Agbeko Agbenator, who signed the letter (on behalf of the Sports Minister) appeared before CHRAJ as a witness. The Commission investigates an allegation by the Progressive Nationalist Forum against the former Minister for fraudulently acquiring a German visa for his girlfriend, Edith Zinayela.

The controversial visa request letter which was said to have been signed and sent to the Protocol Bureau of the Ministry of Foreign Affairs by Mr.Agbenator on behalf of Muntaka on May 9, 2009 which was Saturday, a non-working day. Even though he signed the letter on Muntaka's behalf, Mr. Agbenator said, the former Minister did not see the letter, let alone knowing of its content, which indicates that the Minister was only in charge compiling a list of the other 3 people he, Muntaka was travelling with, which he said Muntaka should have done it himself, since it was his responsibility. This created suspicion, which compelled the counsel for Progressive Nationalist Forum (PNF), Anthony Namoo, to raise issues about the credibility of the letter.

Mr. Agbenator objected to other accusations but however, admitted that it was Muntaka who gave him the list of the names of the people he was going to fly on the Nuremberg, Germany trip with. They included Edith Zinayela, Charles Aryeh, who was Director of Sports Council and Kofi Kukubor, who arranged for the meeting with officials of the sporting kit manufacturers, Puma.

At the time he wrote the said letter requesting assistance from the Ministry of Foreign Affairs for the acquisition of the visa for the four, Mr. Agbenator claimed not to have known where Edith Zinayela (the so-claimed Muntaka's girlfriend) was working since Muntaka did not instruct him on what designation to give her, therefore denying the claim that he falsely misrepresented the lady.

Muntaka could have saved the tax payers money by simply placing his orders from the German PUMA manufacturing Company per E-Mails and Internet or probably gone to Germany to hold negotiations with only one official from the Sports Ministry.

Ghana Embassy in Germany could have equally acted on behalf of Muntaka to purchasing those Sports equipment.

Some of the Ghanaian Ministers must stop the egoistic and extravagant wasting of our resources.