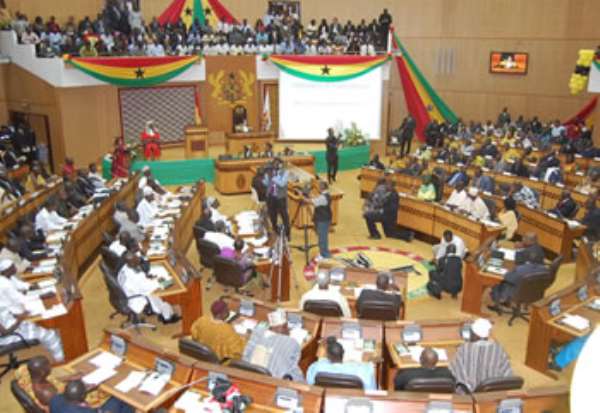 Accra, Oct 20, GNA- The first ever survey on the performance of Members of Parliament known as Political Performance Index (PPI) conducted by the Africanwatch Magazine has revealed that 24 law makers representing ten percent were not up to the task.

They obtained marks between 0 and 49.
Former Members of Parliament and Parliamentary Correspondents were asked how knowledgeable the 230 MPs individually were on law making and the constitution, how active they are in the legislative business, contribution to parliamentary debates and how their ideas and suggestions reflect society's needs and interest.

The rest of the criteria are tolerance of the view divergence to the member's party's interests and ethics of the House.

Those tagged as "moderately performed" were 23 with marks between 60 and 64.

Among the 230 MPs, 22 who scored between 70 and 74 were deemed to have performed satisfactorily.

Those who scored between 85 and 89 were 10 MPs and were ranked as having high performance.

In a message, Mr. Steve Mallory, Editor of the Africawatch Magazine, stated that the poll was not to disgrace or bring any politician down but to evaluate and monitor the performance of political officials to keep them on their toes.

"We seek no animosities", he stated.
He noted that "this kind of surveys" would make them sharpen their reflexes and improve their performance for the good of the people and themselves.

He said the poll would be an annual affair that takes into account the "amount of work" they have done in their individual constituencies.

He noted that an MP could be influential in Parliament, speaking to all debates but could amount to nothing if the he or she neglects the needs of the constituents.

The findings of the survey were published in the October 2010 edition of the Africawatch Magazine, an international periodical.