£5 million gold and diamond iPhone is world's most expensive mobile 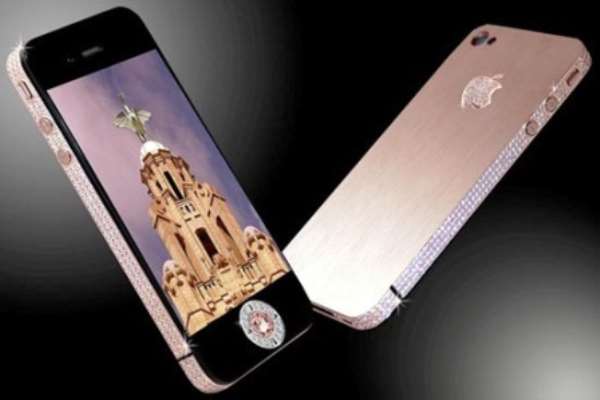 
The handset is wrapped in more than 500 individual flawless cut diamonds totalling 100 carats.

It features two interchangeable diamonds which fit over the 'home' button – a single cut 7.4ct pink diamond and a rare 8ct single cut flawless diamond which are together worth more than £4 million.

The back of the phone is plated in rose gold and the Apple logo glitters with 53 diamonds.

British designer Stuart Hughes, 38, of Liverpool, was commissioned to make two of the bespoke handset by a mega-rich Australian businessman.

He said: "It was a fantastic challenge and I am really pleased with the end result – the phones look superb."

Phones are so popular at the moment and this is the ultimate design for one. It was a very exciting project.

"The diamonds are rare and difficult to source, stones like that usually have a very long history."

"It is amazing that someone is prepared to spend £5 million on a phone, I doubt it will get used because it is worth so much money."

"It would be a disaster if it was ever lost."
The phones come with their own protection box – made from a single 7kg block of Granite in imperial pink with the inned lined with Nubuck top grain leather.

Father-of-two Stuart gold-plated his first mobile phone, a Nokia 8800, in 2003 and has since been making elaborate bespoke designs for customers in London, Marbella and Monaco.

His cheaper iPhone models – which retail between £1,800 and £22,000 – have been snapped up by showbiz royalty including Stefano Gabbana, of Dolce and Gabbana.

Since its launch in 2007, the iPhone has been incredibly popular with the gadget recently named the coolest thing on the planet.

Bishop Dag apologises to Otumfuo over 'offensive' sermon
35 minutes ago

There's power in a father's encouragement – Pastor Otabil
35 minutes ago