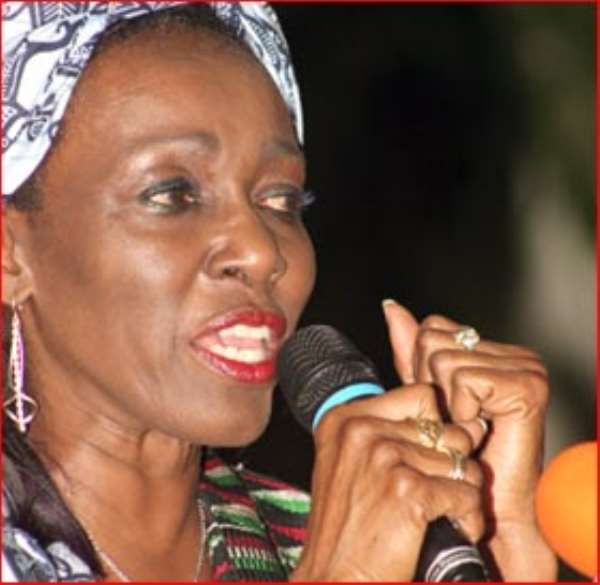 Nana Konadu Agyeman-Rawlings, the first National Vice Chairman of the ruling National Democratic Congress (NDC) and wife of the founder of the party, is fuming over reports that she had said President Atta Mills would win the 2012 Presidential election.

Mrs. Rawlings is believed to have an appetite for the Presidency and has directed her anger at the Deputy Minister of Information, Samuel Okudzeto-Ablakwa, who she accused of deliberately spreading reports of her supposed support for an Atta Mills candidature for 2012.

She has expressed shock at the utterance of the Deputy Minister and asked him to immediately swallow his comments and apologize to her and the public he misinformed.

The former First Lady described the development as a part of an ongoing “shameless and spineless political agenda” by government to deliberately distort facts on issues concerning herself and her husband, ex-President Jerry Rawlings.

News broke last week from the Ghana News Agency (GNA) and other sources that Mrs. Rawlings had stated, during the handing over and induction ceremony of the Accra City Campus of the Tertiary Education Institution Network (TEIN) of the NDC that in 2012, Professor Mills would retire Nana Akufo-Addo, the Presidential candidate of the New Patriotic Party (NPP), from politics.

Since then, a number of government spokespersons, including Mr. Okudzeto-Ablakwa, have echoed the report but with a lot of spin that suggests the former First Lady had declared her support for Mills.  But Mrs. Rawlings has described the report as a pack of concocted lies.

A press statement issued last Friday on behalf of the former First Lady noted: “Mrs. Agyeman-Rawlings wishes to state categorically that she did not make statements on the fortunes of President Mills against Nana Akufo-Addo; another member of the panel at the ceremony made the statement about Akufo-Addo going into retirement in 2012.

“The former First Lady is also shocked that Deputy Minister for Information, Sam Okudzeto-Ablakwa who was at the function and heard her comments gave credence to the distortions by stating on Metro TV on Friday morning that she spoke of the fortunes of President Mills in the 2012 elections.”

Though the NDC has not opened nominations for flag-bearer aspirants for the 2012 elections, incumbent President Mills has made it public that he wants to be the party's presidential candidate again so he could have a second term.

His main contender as at now is Nana Konadu who, though has not stated that she wants to lead the party in 2012, has given visible signals that she is galvanizing support all over the country.

Just over the weekend, she was said to be in the Volta Region to meet with party faithful in what is suspected to be one of her several subtle but effective flag-bearer campaign tours.

Meanwhile, government spokespersons have denied claims that Nana Konadu's ambition has led to a rivalry and widening cracks within the party.

The press statement, in explaining exactly what Mrs. Rawlings said during her speech to the TEIN students, noted: “The thrust of Mrs. Rawlings's speech was based on the future of our youth and the need for them to recognize their roots and work hard to leave a grand legacy for the next generation.

She quoted Rumoko Rashidi who said: “History is a light that illuminates the past and a key that unlocks the door to the future” and called on TEIN members to trace the history of the NDC, its objectives and why the student network was established as a branch of the party.

The statement continued: “Ghana, Nana Konadu said, was a collapsed state economically, politically and socially at the time the PNDC came into being but “through diligence, commitment and political astuteness we were able to turn Ghana round.”

She went on to rally the students to appreciate that it was their turn to make an impact on Ghana's socio-political development, saying, “Your time is now!

She said that poverty and hunger in developing countries were due to selfishness, lack of solidarity, and above all, poor governance and called for change in our attitude in order to restore people's faith in politics.”