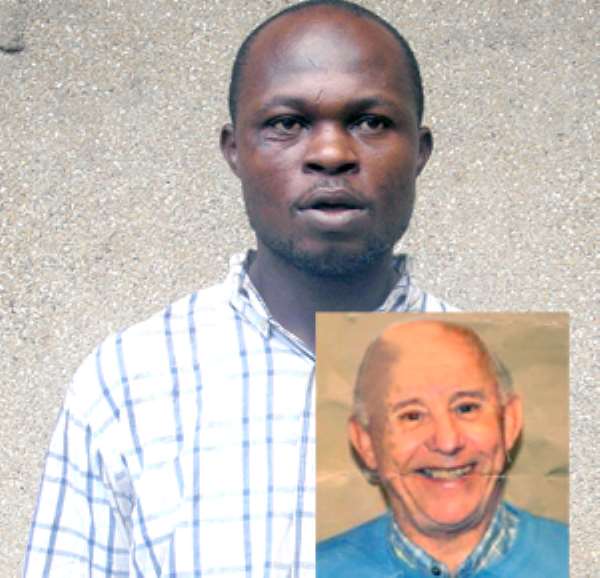 Koforidua, the Eastern regional capital, has been thrown into a state of shock after almost all the major newspapers in the country on Thursday carried the news of a 32-year-old native of the town, Kofi Seidu murdering his boss.

The young man allegedly murdered 75-year-old British-American missionary Rev. Sidney Thomas Barnes, who he (Seidu) had known and worked with for the past 12 years.

Seidu's confession to killing the pastor has hit the town like an earthquake because he (Seidu) is a very popular figure in the town, as a result of his association with the pastor who established a popular secretarial and computer school in the New Juaben municipality in addition to running a church, Manna House Mission, at Koforidua.

Residents of Koforidua as well as Nsawam, where Rev. Barnes had a farm, had been discussing the gruesome murder which they said had tarnished the image of the region and Ghana as a whole.

The tall and well-built Kofi Seidu, who doubled as a driver and a personal assistant to Rev. Barnes, was also the farm manager of a huge pawpaw and pineapple farm owned by the late missionary at Akwamu-Amanfo, near Nsawam Adoagyiri.

Seidu has mentioned the head pastor of the church, Pastor Padmore Goodwill, as the one who allegedly influenced him to kill the missionary so that his estates and property would be shared between them.

He was alleged to have stabbed the minister at Adawso, near Koforidua when he was asked by Pastor Goodwill to pick him (Rev. Barnes) up at the Kotoka International Airport, after he had returned from a missionary work on the night of March 18.

According to police report, Seidu stabbed the man and put the body in an air-tight bag belonging to the deceased and dumped it in a well on his farm near Nsawam and covered it with sand.

According to DAILY GUIDE investigations, Seidu, who was using an old-fashioned cross-country Land  Rover with registration number WR 418 P, had been telling friends before the murder of his 'master' that  the vehicle had been handed over to him and  was now his property.

Our investigations also revealed that he had a group of friends from Koforidua Zongo he normally moved with.

He usually posed as 'security man' or a bodyguard and people in Koforidua believe he could belong to some 'notorious' gang.

He sometimes hanged around with friends at most of the popular drinking spots at Koforidua and he was said to be very generous as well.

He is also very well known at Nsawam because of his position as the farm manager of the Mission Farms.

Checks by DAILY GUIDE at Rev. Barnes's former residence at Adawso, where he stayed with Kofi Seidu for six years before relocating last year, revealed that the missionary had been taking good care of Seidu and provided him with everything that he needed.

According to the landlord who pleaded anonymity, Rev Barnes could sometimes be difficult but was generally good to people he worked with.

He told DAILY GUIDE that Rev. Barnes could leave everything in Seidu's care whenever he travelled abroad, sometimes spending four or five months in the US before returning.

DAILY GUIDE also established that when Rev. Barnes was not seen in the town after some time, friends of Seidu started spreading rumours that he had been arrested in America with illicit drugs and that he would not be allowed by security agents to return to Ghana.

Kofi Seidu was arrested on September 26 this year after an informant who bought a laptop belonging to Rev. Barnes from Kofi Seidu saw the name and picture of the missionary, who had been reported missing in the print media, on the stolen laptop.

He initially denied knowledge of the disappearance of the missionary but later broke down and confessed to the crime before he led the police to the site where he had dumped the body.

The body was exhumed on Monday, October 11 by the police homicide unit from the police headquarters. Fortunately, six months after the murder, the body appeared to be well preserved because of the cold condition of the well which was covered with sand.

Kofi Seidu would be arraigned on October 28, according to the police.

Kofi Seidu's trial is expected to rival O.J. Simpson's trial in the United States, dubbed the Trial of the Century, which took place in 1995.

DAILY GUIDE has learnt that family members of Rev. Barnes have arrived in the country and are expected to observe proceedings in court and also to take over the estates and property of their beloved one.

DAILY GUIDE also learnt yesterday that students of his secretarial school in Koforidua will be wearing black from today to Wednesday to mourn their founder.