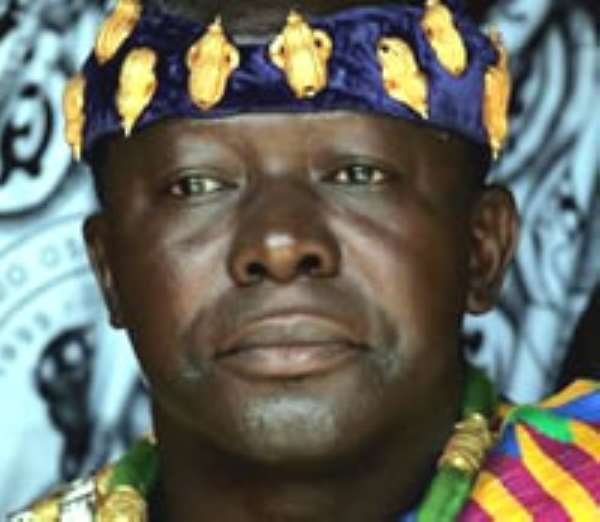 
Otumfuo Osei Tutu II has reiterated his unflinching commitment towards the eradication of poverty amongst people in the Ashanti region and the nation as a whole, through the initiation of sound development projects.

King Solomon, as he is affectionately called, also reaffirmed his devotion to combat all forms of injustice in his kingdom through a strict adherence to a transparent, truthful and all-embracing leadership.

Otumfuo stated that it was in line with his dedication to fight poverty and create wealth among his people that he declared quality and affordable education as his number one priority when he ascended the Golden Stool eleven years ago.

The Ashanti King noted, "My heart is always filled with joy when I come across lawyers, doctors, teachers and other professionals who made it in life and were contributing their quota towards the development of the country all because of the assistance of my educational fund."

He explained that he was motivated to chart the path of development because he believed that development agenda should not be the responsibility of the government alone.

"Because of this conviction, together with my lieutenants, we started to champion development projects in the area of education, health, among others, all with the aim of helping our people to improve their lot" Otumfuo stressed.

The overlord of the Ashanti Kingdom indicated that he was extremely happy and thankful to God that the development projects he embarked on were still on course, promising to do more for his people and Ghanaians in general.

King Solomon made these remarks on Friday when he cut the sod for the construction of a multi-million dollar project, dubbed 'Sun Shine Kumasi City' project, at Race Course, a suburb in Kumasi.

The multi-purpose project, which is being spearheaded by Kenbert Group and its international partner, a South African based company, is expected to be completed within three years from the commencement date.

The facility, when completed, will have a shopping mall/retail facility purposely built to meet the demands of residents in the city.

The first class shopping mall and retail facility will have facilities such as a commercial parking lot, retail areas, food courts, banking/insurance/traveling tours and restaurants.

In addition, it will have a five star international clinic, fully equipped with an ambulance station and a helipad to serve the medical needs of people in the Ashanti region, the country and the West African sub-region at large.

Also expected to be included in the amazing project is a five star hotel with 200 state of the art executive rooms, presidential/royal suites, amphitheatres, restaurants, casinos and conference facilities.

An ultra modern amusement park, fitted with water sports, roller coasters, fitness centers and open-air facilities are the other amenities which are anticipated to be components of the wonderful project.

Semi detached executive rooms totalling 240 units, built in eight separate gated communities, of which each community will have its own swimming pool and tennis court, will also be included in the Sun Shine Kumasi City project.

The Asantehene, who is the brain behind the project, was particularly delighted that the project, when completed, will give Kumasi a major face-lift and also create employment opportunities for the people.

The chairman of Kenbert Group, Raymond Kwaku Asante, was equally delighted that at long last the project was about to commence.

According to him, the project will not only create job opportunities for the people but will also open the city to foreigners, thereby raising the standard of tourism in the region.

Thanking the Asantehene for his immense support, Mr. Asante disclosed that the facility will be connected to the Kumasi Cultural Center to ensure that the cultural heritage of the ancient city is projected internationally.

The Ashanti Regional Minister, Kofi Poku Manu, on his part, appealed to the residents to support the project to ensure a timely completion, stressing that economic activity in the city will be given a tremendous boost when the project is completed.

Welcoming the dignitaries to the programme, the Metropolitan Chief Executive (MCE) for the Kumasi Metropolitan Assembly (KMA), Samuel Sarpong, thanked Otumfuo for initiating such a huge project, promising that traders who will be affected will be relocated.

Speaking on behalf of the technical partners assembled by Kenbert Group for the execution of the project, Alhassan Andani, Managing Director of Stanbic Bank, assured that funds for the project have been well secured and that the project will commence without any financial hitches.