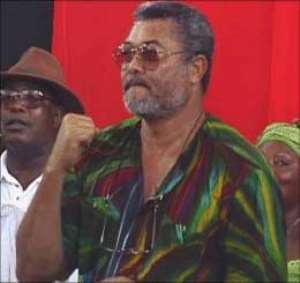 Former President J. J. Rawlings has described people in Government as Lairs and a bunch of arrogant people, who do not deserve to rule the nation. The former President who was speaking at the NDC congress last Saturday, called on the different factions in the NDC to join hands with him to fight and ‘kill’ the NPP Government, which he described as the real enemies. According to him, the government with the help of the media is building an empire of wealth in order to entrench itself in power. Flt Lt. Rawlings who did not read his prepared speech for lack of time said his speech had nothing to do with the congress but was a long list of crimes of the Kufuor administration, which he was going to show to the country to reveal how the Government has left Ghanaians more miserable than before.