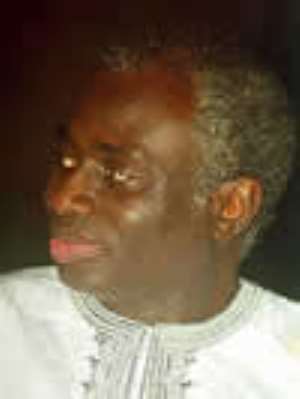 Former Chief Executive Officer (CEO) of the Ghana National Petroleum Corporation (GNPC) and a member of its Board of Directors, Tsatsu Tsikata and five others, have been dragged to court for entering into a 3.6bn cedi agreement on 11 September 1998 without any lawful authority from the GNPC.

According to the Statement of Claim, the loan was to be repaid with interest within 91 days (i.e. not later than 11 December 1998), but it was provided that the Plaintiff (GNPC) could roll it over for another 91 days.

It is stated under “Particulars of Fraud” that Tsatsu Tsikata and Cato Brown did not request the recommendation of the then Secretary (minister) for Fuel and Power or seek the approval of the Secretary responsible for Finance for the borrowing from CDH (1st Defendant) and deliberately concealed the same from the Plaintiff’s (GNPC) Board of Directors.

According to GNPC, “as a result of the fraudulent collusion between the 2nd, 3rd and 4th defendants, the debt of 7.2bn cedis contracted in September and October 1998 has by June 2001 swollen to the amount of 13bn for which judgement was given against the plaintiff under the purported terms of settlement.”

GNPC averred that the terms of settlement filed as a consent judgement dated 4 June 2001 was signed by the 5th and 6th defendants “without the requisite authority of the plaintiff’s Board of Directors and are, therefore, not binding on the plaintiff.”

The plaintiff claimed that in signing the purported terms of settlement without seeking the prior authorisation of its board, the 5th and 6th defendants were fully aware that the borrowings which formed the basis of the settlement, did not comply with Section 15(2) of PNDCL 64. They were, therefore, in breach of their fiduciary obligations to the plaintiff company in so signing.

Portions of the statement also assert that on 11 September 1998, a Deed of Charge was without the requisite authority, executed between CDH Financial Holdings Ltd., and the plaintiff whereby it (plaintiff) charged the said CDH Financial Holdings the equivalent of $2m of its shares in Ecobank Ghana Ltd., to secure the repayment of the loan granted on that date.

“By reason of the assignment of 21 October and the agreement of 23 October, the plaintiff was deemed to be indebted to the 1st defendant in the sum of 7.2bn cedis of which 3.6bn cedis 11 December 1998 and 3.6bn cedis was repayable with interest on 21 April 1999.

A letter dated 8 December 1999, according to the statement, the 2nd defendant proposed “a sale and leaseback” of specified corporate and residential buildings owned by the plaintiff and that in another letter dated 12 April 2000 from the 2nd defendant to the 3rd defendant it was proposed that certain properties specified in a mortgage document would be “discharged if the sale-leaseback arrangement is completed and the proceeds from same used to retire the credit facilities granted to GNPC.”

According to plaintiff, the amount stated in the back-dated mortgage was 6bn because the 3rd defendant, without authority, had sold the plaintiff’s shares at Ecobank and the proceeds to the 1st defendant in payment of the 7.2bn 1st defendant had purported to lend to the plaintiff-company.

The plaintiff claims as against the 1st defendant, an order setting aside the purported terms of settlement filed as a consent judgement on 4 June 2001 in Suit No. C. 98/2001 and entitled CDH v GNPC on grounds that the borrowing which was the basis of the claim in the said suit was illegal and void because it was in contravention of Section 15/25 of the GNPC Decree, 1993 (PNDCL 64); a declaration that all mortgages and/or charges on the plaintiff’s property arising from the said illegal and fraudulent borrowing are void and unenforceable, among other things.

GNPC is claiming against 3rd and 4th defendants jointly and severally an order that they should fully indemnify the plaintiff against all damages and losses suffered and liabilities incurred or likely to be incurred by reason of their illegal and fraudulent borrowing transaction which they colluded with the 2nd defendant to carry out in breach of their fiduciary obligations to the plaintiff-company.

Finally, plaintiff is requesting the court to institute against 5th and 6th a declaration that they were in breach of their fiduciary obligations to the plaintiff-company in signing the purported terms of settlement filed as a consent judgement without seeking the authority and approval of the plaintiff’s Board of Directors.